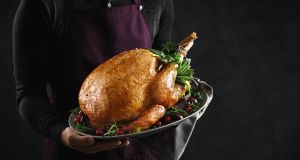 When the food-buying teams at Aldi headquarters in Naas, Co Kildare, return to work in early January after their Christmas break, one of the first tasks they face is to eat turkey – a lot of turkey.

It might not be everyone’s idea of how to begin a new year, but with Irish shoppers spending an extra €90 million on groceries in the weeks leading up to December 25th, and the big bird a key component of that spend, the German retailer needs to compare its offering with those of its competitors.

To do so the company’s chefs roast turkeys purchased from its rivals the previous month and stored in their freezers. The birds are evaluated and compared with the Aldi selection, and the first steps are taken in deciding what will be on shop shelves 11 months later.

“Christmas starts on the fourth of January for the following year,” says John Curtin, group buying director for Aldi in Ireland. By March the type, size and range of turkeys, stuffings and sides will have been finalised for Christmas 2019. “Our CEO for the UK and Ireland, Giles Hurley, will come over for final sign-off. We present the range to him and he will sample everything.”

Taste testing is an ongoing, year-round activity in the kitchen at the company’s regional distribution centre and head office on the outskirts of Naas. When it comes to turkeys, there are several factors under consideration. “We score them analytically across how they look raw, because that’s important for the consumer, how they look cooked, and on flavour and texture,” says David Evans, a buying director.

According to research group Kantar Worldpanel, the average Irish household spent €1,532 on groceries in the last 12 weeks of 2017. Aldi had a 10.3 per cent share of that spend, behind Dunnes (23 per cent), Tesco (22.8 per cent), SuperValu (22.4 per cent) and Lidl (10.4 per cent). It’s clear from those figures that what goes into the Christmas shopping trolly is highly significant in a competitive marketplace.

Good for the goose

To that end Aldi is broadening its product range, to make sure it has what all of its customers are looking for. Irish geese (€54.99) were sourced from Skeaghanore Duck for the first time three years ago and have proved popular, with 1,100 now on order. This year fresh carp will be stocked for the first time to cater for customers from eastern Europe, where the freshwater fish is traditionally eaten on Christmas Eve.

But turkey and ham are still the bread and butter of the grocery trade in Ireland at Christmas. In the five days between December 20th and Christmas Eve, Aldi will sell about 60,000 turkeys, all of them bred and reared in this country and processed by Monaghan company IGWT Poultry Services.

Not all turkeys on sale in Ireland this month will have been bred or even raised here, something to bear in mind when selecting a bird for the family table. Day-old chicks that are imported, and have their first feed in Ireland, are entitled to be sold as Irish. But Aldi does not stock these. “We won’t deal with that. We want birds to be hatched in Ireland, born in Ireland,” Evans explains.

This year Aldi’s most expensive turkey is an organic, free-range, bronze bird (bronze refers to the breed), which will weigh 4kg-4.99kg. It is included in the Specially Selected range and will sell for €47.99. The bird comes in a smart cardboard box with rope handles. “A farmshop appearance” is how Evans refers to the packaging. “We want people to think, ‘Wow, what’s that?’ and open it up like a gift,” he says.

There will also be, for the first time, a boneless crown stuffed with a very tasty spiced dried fruit stuffing and topped with a maple bacon lattice (€29.99 for 2.4kg). In another first, a crown with a meat stuffing – pork and cranberry (€34.99 for 2.4kg-2.8kg) – will be available, and both are also in the Specially Selected range.

Those price tags have been a closely guarded secret until this week, when the company went public with its Christmas 2018 offering. But they may not actually be what you’ll eventually pay to take home one of those premium birds.

“We make sure that we launch at a price we think won’t be beaten, and we will double-check that,” John Curtin says. What that means is that on December 20th, when the fresh birds hit the shelves, Aldi staff will be out patrolling their rivals’ aisles to see how much they are charging. Does that mean prices might go down between now and December 24th? “Yes, absolutely, that’s the only thing we can change at that stage; we won’t be beaten [on price] .”

Holding out in the hope of a price correction may prove to be a costly gamble however, because when they’re gone, they’re really gone. Pre-ordering is not a feature of Aldi’s business model, so if you want a specific turkey, or a goose, you’ll have to take your chances, and that probably means shopping early in the five-day window.

“The customer who shops for premium, shops on day one, they want to make sure they get what they want. The customer buying standard [turkey], maybe leaves it to day three, the 23rd,” says Evans. “There will be queues outside the stores on December 20th for the premium turkeys, for the geese, for the real call-out centrepieces,” Curtin adds.

If you are less specific in your requirements, Aldi says you will be guaranteed to find a turkey, and all the trimmings, for sale even up to 5pm on Christmas Eve. While this means the shops are overstocked, any unsold birds are frozen in store and donated to FoodCloud hubs, from where they are distributed to charities. A silver lining at a time of excess.

There is growth, too, at the top end of the market, with consumers willing to pay a premium for organically fed turkeys.

Cooks catering for big families or groups are increasingly buying one medium-sized turkey to present as a table centrepiece, and cooking an easy-carve boned and rolled turkey joint in addition.

Irish consumers want their turkey to look like a turkey. Last year Aldi introduced a breast meat parcel with stuffing on the inside, tied up with butchers’ bands in th shape of a flower. It did not sell well and will not be repeated, despite John Curtain describing it as “still one of the best things I’ve eaten in this kitchen”.

TOP TIPS FOR COOKING THE BIRD

Salting is the new brining. Rubbing sea salt into the turkey two days before roasting results in a juicier bird.

If you are cooking a goose, prick the skin with a fork and pour boiling water over it before you roast it, to start the fat rendering.

Keep turning the tray in the oven, so the turkey cooks evenly, even if you have a fan-assisted oven.

Cover the breasts with buttered muslin or foil to prevent them drying out.

Always check the cavity to see if giblets, in their plastic bag, are included. Don’t throw them away: boil them to make stock for turkey gravy.