What’s really in a pot of Petits Filous? Over a spoonful of sugar for starters

If you want to cut down on sugar intake in fromage frais products, buy Irish 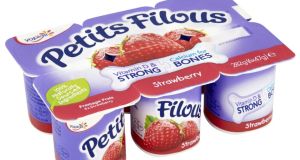 When it comes to finding quick snacks for kids, many parents opt for a pot of something yoghurty from the dairy section in the supermarket. There are lots to choose from, such as the convenient Petits Filous and similar products.

These little containers do not contain yoghurt, however, but “fromage frais”, as noted on the front of the packet, which means fresh cheese. It is low in fat, making it a popular dessert in France.

But are they as healthy as they seem?

Let’s take a six-pack of strawberry Petits Filous. The front of the packaging says “vitamin D and calcium for strong bones”. It’s true they work well together to achieve strong bones. What it does not say is that the vitamin D is not naturally occurring, but has been added as part of the ingredients. It also says “now 50 per cent daily vitamin D NRV”, which refers to the nutrient reference value. (This is a way of showing how much a person needs to have to avoid suffering from a deficiency in a vitamin or mineral.)

On reading that, you might think that one pot gives a child 50 per cent of their daily vitamin D needs. Not so. Look closely at the nutrition information panel and it shows they have to eat two pots to get 2.7 micrograms of the vitamin, which is about half of a child’s needs.

The nutrition panel also says the product supplies 19 per cent of calcium NRV, but some of it has been added during processing and again that is from two pots.

That would be fine except there is more than a teaspoon of sugar in each little pot. That’s even though Yoplait says it has reduced the content by 17 per cent in recent years.

I’m no anti-sugar zealot, but even I was surprised to see that.

The list of ingredients shows why this is. It lists fromage frais (pasteurised skimmed milk, cream, lactic cultures), sugar 5.7 per cent, water, strawberry purée from concentrate 5 per cent, carrot juice, fructose 1.5 per cent, corn flour, lemon juice, natural flavouring, milk mineral concentrate and vitamin D. So there is sugar, strawberry purée, carrot juice and fructose, which is fruit sugar, all adding to the sweetness.

Cornflour is a cheap filler helping to keep costs down, though it does add a claggy mouth feel. That “milk mineral concentrate” at the end is a product sold by food ingredients manufacturers. It is where the calcium comes from, though it would probably not be obvious to the average consumer.

Beside the number indicating the weight of each pot, check out the blue circular symbol with letters and numbers inside. This EU approval number identifies the final processing plant. The letters FR tell you that this is from France.

There are much better Irish versions available, such as Bio Baby from Glenisk, a dairy in Co Offaly. The cover on the four-pack of strawberry and apple has a big green stamp saying “absolutely no added sugar”, which always makes me suspicious as such products usually have a selection box of sweeteners. Not in this case, however. It lists: organic milk, organic strawberry purée (6 per cent), organic apple purée (6 per cent), organic cream (milk), organic banana purée (5 per cent), natural flavouring and cultures (streptococcus thermophilus, bifidobacterium, lactobasillus casei, lactobasillus bulgaricus).

Surprisingly, both products cost about the same, even though this one has no flour filling out the ingredients and no added sugar. While the Petits Filous is almost 10 per cent sugar, Bio Baby is just 4.6 per cent sugar.

It tastes better too.

Some Glenisk products aimed at older kids do have added sugar, but these are for those just over six months, so it is left out.

This Baby Bio pot is bigger too at 60g, a size that was determined by dieticians, according to Glenisk.

There are similar products to Petits Filous, such as Little Delights from Aldi, but they are no better. The six-pack of Brooklea Little Delights come in 50g pots. The strawberry and banana pots are more than 10 per cent sugar and have even more additives than Yoplait’s version. They are also made in France, according to the packaging.

I love cows and I have nothing against French cows, but if you want a better product for a similar price, this is a good time to buy Irish.