This easy chorizo stew tastes amazing and is incredibly cheap 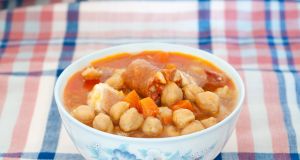 The best food is peasant food. The Italians know it. The French know it and the Spanish know it. And when it comes to peasant food in Spain, it doesn’t get better than cocido – chorizo and chick pea stew.

I first came across it when I found myself living, quite by accident, in northern Spain in the 1990s. Having being reared on the plainest of Irish food, I initially eyed the weird sausage with suspicion. I could hardly be blamed for that. In the 1990s chorizo was not a thing in Ireland and it could not be sourced outside of the most high-end of Dublin delis. It certainly never made it west of the Shannon.

So, when I found the blood red discs with weird lumps of fat swimming in a stew that was served to me as part of a ridiculously cheap menu del dia not long after I arrived in the country, I prodded it and poked it from almost every angle before deciding to eat it.

It was amazing – soft and bursting with peppery flavours. I never looked back and in the two years or so that I lived in Spain, I lived for cocido, almost.

When I came home to Ireland, I resolved to become a master cocido maker, the Cocido King of Ireland, if you will. But I was hampered by the absence of chorizo in my world. And matters were not made any easier because the only chickpeas I could ever find needed to be soaked overnight before they could be used.

I lost count of the number of times I put chickpeas on to soak before forgetting entirely about them, or deciding to eat something completely different, or abandoning food in favour of the pub by the time they were ready to cook.

But things changed almost overnight. For reasons that are shrouded in mystery, chorizo suddenly became a big thing in Ireland. Today it can be found in every supermarket and in many of the convenience stores that have spread like a virus throughout Ireland. And – crucially – the need for chickpea soakage has almost entirely disappeared as a result of the proliferation of the canned variety over the past decade or so.

Spanish food purists may turn their noses up at my version of their culinary mainstay, and I know it is not traditional, not least because it lacks the hunks of bacon knuckle and pigs trotters and many of the more challenging ingredients frequently used in that part of the world. But it is still brilliant. It is impossible to get wrong, incredibly cheap, fast to cook and needs only a single pot.

Oh, and it tastes amazing.

What you’ll need and how to cook it:

A couple of big onions

A tin of chickpeas

5 or 6 good-sized potatoes, peeled and chopped into decent-sized chunks

A tin of tomatoes mixed with one litre of vegetable stock

Roughly chop the onions and fry them in a decent dollop of olive oil for as long as feels right – two minutes tops.

Add the chopped chorizo and fry it for a while – but not too long. Then add the potatoes and the carrots and do some more frying.

Add the tomato and stock mix (and yes, these could be considered two separate ingredients but that would make it a seven-ingredient dish, which is cheating.

Loosely cover the pot and gently simmer for around 30 minutes.