BBC Masterchef judges John Torode and Gregg Wallace have caused controversy in Malaysia after they eliminated contestant Zaleha Kadir Olpin, saying her chicken rendang was not crispy - an innacurate element of the dish. Video: BBC 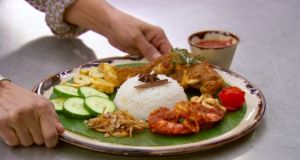 The row over “Rendanggate” rumbles on, and the sending home of a Malaysian-born chef – because the Malaysian chicken dish she served to an English man and an Australian wasn’t sufficiently crispy – has sparked a diplomatic incident and enraged a nation.

The judges John Torode and Gregg Wallace were unimpressed to the point of disgust. “The chicken skin isn’t crispy, it can’t be eaten. All the sauce is on the skin I can’t eat,” Wallace said while Torode was almost as uncomplimentary.

Furious Malaysians raced to Kadir Olpin’s defence and raged at the judges for not knowing their spicy chicken rendang from their lardy elbows.

Then in a somewhat misguided attempt to pour soothing oil over troubled waters Torode took to Twitter and suggested the dish was perhaps from Indonesia and signed off his tweet with a cheery Namaste – a word which is most definitely from India.

If you’re struggling to understand why anyone might get hot under the collar about all this, imagine Jamie Oliver sending someone home from a hotly contested cookery show on British television for making a coddle with soggy rather than crispy sausages and then suggesting on Twitter that coddle might be a Welsh dish before ending his tweet with a cheery “toodle pip”.

Britain’s ambassador in Malaysia, Vicki Treadell got involved and sided with Kadir Olpin too. “Rendang is an iconic Malaysian national dish not to be confused with Indonesian options . . . It is never crispy and should also not be confused with the fried chicken sometimes served with nasi lemak,” she said.

“It’s amusing when foreigners try to teach Malaysians on their own traditional dish. It prompts us to ask whether this is a form of ‘whitesplaining’ on social media,” Malaysian foreign minister Anifah Aman wrote on Facebook. While the Malaysian prime minister, Najib Razak, tweeted: “Does anyone eat chicken rendang ‘crispy’?”

On Wednesday morning Wallace tried to redeem himself. Appearing on ITV’s Good Morning Britain he gave his version of events: “What happened was, part of her dish was a rendang. And I said the skin was not crispy. I didn’t mean it should be fried, like fried chicken. What I meant was it was not cooked and it simply wasn’t cooked. It was white and flabby. If you look at it, the skin wasn’t cooked. Crispy was the wrong word. The skin wasn’t cooked.”

It is not the first time a television chef – or a judge on some other reality television programme – has got things wrong, at least in the eyes of the keyboard warriors who are always watching and always waiting to spring.

1. Cream in Spag Bol?
Surely some mistake Mary Berry? The beloved chef risked undoing years of stellar work on the Great British Bake Off last year when she told viewers of her BBC programme Mary Berry Everyday that a key ingredient of her Bolognese is double cream. Without having tasted so much as a mouthful of the dish, Twitter lit up and she was roundly denounced from the social media pulpit.

2. Chorizo in paella
Jamie Oliver was roundly denounced in 2016 by Spanish purists for daring to suggest that people add chorizo to their Paella. “Great Spanish food doesn’t get much better than paella. My version combines chicken thighs and chorizo,” the chef wrote in a Twitter post that reached his 5.6 million followers. As foodies will know, the dish from Valencia includes meat, fish, shellfish and vegetables but not sausage. Spanish social media was furious, with many users suggesting he cook their version of fish and chips which variously included duck, beef and aubergines.

3. Letting the cat out of the bag
It was a case of the show must go on when Prue Leith was drafted in to replace Mary Berry for the first series of the Great British Bake Off after its controversial switch to Channel 4. She did a stand-up job right up to the moment she announced the winner of the final on Twitter a full 12 hours before the programme was broadcast with the two words: “Bravo Sophie.”

The 77-year-old was in India when she posted the tweet and said she was confused by the six-hour time difference. After realising her mistake she tweeted again to say: “I am so sorry to the fans of the show for my mistake this morning. I am in a different time zone and mortified by my error.”

4. You say tomato
Nigella Lawson has upset people on more than one occasion over what they believed were errors in her cooking. First she suggested that spaghetti alla carbonara be made with cream when – as many, many people pointed out – it should properly be made with eggs only. Fans were similarly unimpressed last year when they happened upon her tomato salad recipe which was basically halved cherry tomatoes drizzled in salad cream.

5. Raw deal
Popular BBC cooking show The Saturday Kitchen has not been error-free, with even the best of chefs appearing to make a bloody mess of things. Early last year, Michel Roux Jr and Jose Pizarro cooked ham and pork escalopes and to viewers’ horror, the meat looked worryingly raw as it was plated up. We’re not entirely certain if any of it was eaten.

6. Gategate
The Great British Bake Off has had more “Gates” than a dog track. Bingate saw a contest leave the show for presenting a bin to the judges after a fellow contestant took his Baked Alaska out of the freezer and ruined it on him. Northerner Paul Hollywood become embroiled in Jaffagate after being filmed dunking a Jaffa cake into his tea something which prompted Mary Berry to say “We don’t do that in the south.” And of course there was Custardgate which saw one contestant steal – by accident – another contestant’s custard at a crucial moment.

If you'd like to make an authentic - not crispy - Chicken Rendang yourself, Malaysian cookbook author Bee Yinn Low shares her recipe with us here.