Six-ingredient supper: Potato, cod and egg. What’s not to love about creamy mash, with the added richness of egg and buttery cod? 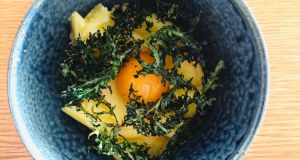 This is a family favourite in our house. My wife Sinead does most of the cooking and with four kids, it needs to be quick and not too labour intensive. Our nine-year-old son recently became a pescatarian, so fish is on the menu most nights of the week in our house.

This cod and egg dish is a real favourite. What’s not to love about creamy mash, with the added richness of egg, buttery cod and the mild bitterness of kale? It makes for a simple, comforting meal for all the family.

Nearly a decade ago, cod stocks were close to collapse but now, thanks to the enormous efforts of a coalition of fishing organisations, you can buy North Sea cod with a clear conscience as it has been certified sustainable. If you don’t have cod, the recipe works just as well with haddock or pollack.

Mash made from baked potatoes is extra light and fluffy and you get the bonus of the roast skins on top of the dish to add texture. The egg is added raw, but the heat of the mash warms it just enough to give it a luscious texture.

What you’ll need and how to make it

Method
Bake the potatoes in a hot oven at 220 degrees Celsius, until soft (approximately 45 minutes).

Carefully split the potatoes and press the flesh through a sieve into a bowl. Return the skins to the oven and reduce the heat to 180 degrees Celsius.

Dry the skins in the oven until crisp. Wrap cod in foil and add a little butter and thyme. Place the fish in the oven at 180 degrees Celsius for eight minutes, or until it flakes easily.

Blanch the kale in boiling salted water, drain and season when just cooked, about two minutes.

‘After 10 years of marriage, I’ve only had two orgasms during sex’
6