Cafe en Seine on Dublin's Dawson Street has been brought back to life. Many of the original art deco features have been retained in the refurbishment of what many regard as Dublin's first superpub. Video: Bryan O'Brien 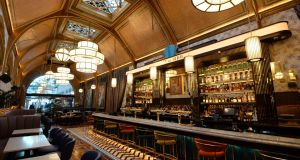 The Grand Bar at the revamped Cafe en Seine, looking through to the new entrance on Anne’s Lane. Photographs: Dara Mac Dónaill

The clue is in the name. Dublin’s Cafe en Seine, which re-opens on Friday after a five-month, €4 million makeover, has been fully Frenchified. The two buildings at 39 and 40 Dawson Street have been transformed into a sleek, opulent space set over three storeys, in a style redolent of the grandest Parisian brasserie.

The most dramatic aspect of the redesign is the new indoor-outdoor ‘street garden’ with a retractable roof, which is visible from the front entrance on Dawson Street. This opens out through a wall of glass onto Anne’s Lane behind. Pastiche shopfronts, a pop-up art gallery which will change monthly, and a fully operational coffee shop, line one side of this space . On the other there is a bar counter with a period building facade behind it.

The idea seems to be to replicate the feeling of being at a terrace table on a Paris boulevard – without the traffic noise and fumes. ‘Mummified’ trees give the space a green feel.

“This is the big one,” says David Murray, general manager of the venture, which is owned by the Mercantile Group. “It is amazing how many people are booking it and haven’t even seen it.” The street garden can seat 80, or accommodate up to 200 people standing. Murray envisages this space, which floods the ground floor with natural light, being popular at lunchtime and for private evening events.

There are seven distinct eating and drinking areas within the vast premises, which has been given its overhaul by Millimetre Design. The library seating area, complete with shelves stocked with vintage hardbacks, leads in to the Grand Bar, with the street garden stretching out behind. Also on the ground floor there is a cocktail bar, adjacent to the 50-seat restaurant, which has its own entrance off Dawson Street. On the first and second floors, the Balcony bar and the Loft bar are comfortably furnished spaces with views down over the street garden.

“We can take 1,100 people; it is a big area with all these different, unique spaces,” says Murray. However the food offering is a uniting force. It is the same throughout, meaning you can order a full three-course meal at one of the bar counters, or settle into the comfortable restaurant space and assemble a meal from the snacks and small plates section of the menu, which benefits from being concise, while still offering plenty of choice.

“Staff are trained to work in any area. It doesn’t matter what seat you’re in, it’s the same food and the same service,” Murray says. “We can have up to 300 seated throughout the building eating at the same time.”

“The big challenge for me was the sheer size of the place. That’s why I was adamant I just wanted one menu for the whole building,” says executive head chef Stephen Gibson, who will also continue to be involved in the kitchen at Pichet restaurant, where he is co-owner. “It’s definitely the biggest place I’m ever going to open.”

Describing the eclectic menu as “a reflection of how I like to eat when I go out to dine, lots of small plates, not set in any one cuisine – there’s Japanese, there’s Spanish, there’s Italian,” Gibson says he is “here to make this place work”.

Assisting him in the kitchen is James Dobson, who started with him in Pichet and after two years moved on to Chapter One for a further two years. He is returning to Dublin from London, where he was in the kitchen at Dinner By Heston [Blumenthal]. Front of house is in the hands of another Pichet alumnus, Bobby Lawn.

Snacks and small plates (€4.50- €12) are a strong feature of the launch menu, with 20 to choose from, in addition to five main courses, plus a further three mains-to-share. Salads (€8-€19) can be ordered small or large; sides (€4.75), including carbonara mac ’n’ cheese and fries with smoked emulsion, are interesting and varied, and there are five desserts including PX crème brûlée and an ice-cream sandwich (€7).

Gibson is keen to expand the mains-to-share element, which for the opening menu features Irish rib of beef cooked over wood; Moroccan style lamb shoulder, and market fish roasted on the bone.

Food is a very big part of the plan for the revamped Cafe en Seine – “and having someone the likes of Stephen [Gibson] coming on board gives us huge credibility”, Murray says. But it is still a superpub, and beverages, served at its five bars, will be its bread and butter.

Peter O’Connor, bar manager and assistant general manager, has joined the venture from Diageo, where he was a global brand ambassador. Working with Crucible London, a mixology and drinks industry specialist, he has devised a cocktail delivery system that will rely on some drinks being partially pre-blended, to be shaken and garnished to order, and a house cocktail available on draught.

Consistency and fast service are the twin aims behind the move. “The whole concept and why we are doing it is because of the size of the venue. We have 22 bar tenders and five bars. If you’re having a strawberry negroni sour and you are really enjoying it, going into the next bar and getting it from a different bar tender, it could change, but it won’t now, because everything is batched.”

The cocktail list runs from €11.50 for the low alcohol Café Aperitivo, served from taps, to €12.50 for classic cocktails, which will still be made to order from scratch, and €13 for the house cocktails. “High volume, high quality,” is what O’Connor says the bars will be aspiring to, and premium spirits will be used in the batch mixes.

Cafe en Seine re-opens to the public on Friday. Opening hours are from 11.30am, with lunch served noon-4pm, and dinner from 4pm until 9.30pm. Late opening of the bars will be until 2.30am at weekends.