‘The waiter explained the menu to us in a marvellous French accent... he was from Tallaght’ 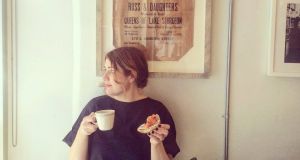 Ali Dunworth: I wanted to savour every moment

Throughout Food Month people will share with us their most treasured food memory.

When I turned 21, my godparents, who had already been instrumental in introducing me to lots of good food, brought me and my sister to Restaurant Patrick Guilbaud.

I’d eaten out a bit by then, but certainly never anything that high-end, and I don’t remember how much Michelin meant to me then.

I’m sure we showed up in what we thought were our best outfits, but they were probably more suited to heading down Harcourt Street – there was certainly some Lycra involved.

We trotted in regardless, slightly in awe, having only seen dining rooms like it in movies – all hushed tones, elegant decor and elaborate settings. I was infatuated straight away.

The waiter meticulously explained the menu to us in a marvellous French accent. My uncle leaned over and told us he was really from Tallaght, and that the accent was part of the job. The giggles erupted and relaxed us into what was a spectacular first tasting menu experience.

I vividly recall the starter of foie gras and fig ice-cream, as it set me on an obsession with figs, figs and anything, that I still have to this day.

I know I definitely felt out of my depth at various stages of the dinner, but tried my best not to show it. This is where I wanted to eat. I wanted to savour every moment.

My absolute joy peaked when the cheese trolley came along. If there was one thing I knew, it was cheese, and I took great enjoyment in asking, I think, if they had a ripe Milleens.

We headed off into the night hooked on Michelin, and although it has evolved so much since my first foray, I still adore this style of classic French dining.

I must remind the godparents we’re due a trip back. I wonder will the guy from Tallaght still be there.

Ali Dunworth is food producer on the third series of RTÉ ’s What Are You Eating?