Why you should check the best before dates on craft beer 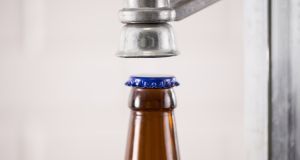 Most craft beers in Ireland are given a shelf life of about a year but really hoppy beers are best consumed within three months of their packaging. Photograph: iStock

Fresher is better when it comes to hoppy beers, so it’s a good idea to check the best before date on a can or bottle before you buy. In a supermarket recently I noticed a majority of the craft cans were approaching (and in some cases well past) their best before dates.

Most craft beers in Ireland are given a shelf life of about a year. Really hoppy beers – pale ales and IPAs – however, are best consumed within three months of their packaging. The beer may not necessarily taste bad at this stage, but its hoppy flavours will have started to change. Because many craft beers are dry-hopped, meaning that hops have been added late in the process to provide maximum aroma, that delicious hit of fresh hops will start to fade over time.

There are many factors that affect a beer as it ages, such as oxidation which can cause off-flavours or discolouration. However, some styles benefit from being left in the bottle (or a barrel), like more complex and higher-alcohol ones, such as imperial stouts or Belgian lambics. But as for your everyday modern IPA or pale ales – the majority of what you’ll find in craft sections these days – it’s best to drink them as fresh as possible.

McHugh’s off-licence are continuing their Road Trip collaboration series, this time with a New England IPA made by Hope Brewery in Howth. This is an easy-going and light-bodied beer with plenty of fruity flavour, a soft body and bitterness and pours as a cloudy straw colour – true to the style of New England IPA. For an old school take on the IPA style try a bottle of Kilkenny brewery Costello’s new White Rhino. It’s got a lovely piny, grassy hop aroma, a crisp body and citrus flavour, and a tasty lip-smacking bitterness.