Paul Flynn: Get fruity with your dinner and see what happens

A traybake, a rustic tart and a simple chutney make the most of autumnal ingredients 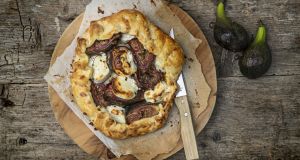 Fruit has been commonplace in savoury cooking since medieval times. I had a happy time filming in country houses for three series of Lords and Ladles on RTÉ. That, I can tell you, was an immersion in all things culinary and medieval. I was the squeamish one, never far from a retch when some unsavoury bauble was dangled in front of me.

The cooking was challenging, as you might expect from a sketchy recipe from the 1500s. Our job was to make it palatable – not easy when you had only sheep’s ears and testicles to work with. Fruit was always present however, a good idea that continues to this day. I love a pop of fruit in my cooking. It provides balance and alleviates richness, particularly as the months turn colder and the cooking becomes heavier.

I love anything with pastry. Today I’m going to make my own. I don’t want you to think I’m a charlatan. I’m using some wholemeal flour. It will pair nicely with the figs. Don’t worry if you don’t have it, just use plain flour.

A galette is a free-form tart. It’s supposed to look rustic and agricultural. It’s the gastronomic version of Connell, resplendent in his GAA shorts, just waiting to be devoured.

The bacon dish is a pleasing tray bake. First the bacon, then the apples and leeks, swirling around in the rich, bacony goodness. Wholegrain mustard cuts through it.

This chutney is a tribute to Gary Rhodes, inspired by a recipe of his. I still can’t believe he’s gone. He was an inspiration to a lot of people, including me. I remember his debut TV appearance on one of Keith Floyd’s programmes. Floyd was clearly annoyed at this upstart hogging his camera time. Rhodes’s stardust was evident, and he was rarely off our screens for the next two decades.

Seedless grapes are the key to this chutney. It’s a reminder of what a great and unique influence he was on a generation of chefs.

2. Put the bacon into a saucepan of cold water, bring to the boil and simmer gently for 50 minutes or so, until tender.

3. Meanwhile cut the leeks at an angle, 2cm thick, then wash them thoroughly.

4. Remove the core and cut the apples into six.

5. Place the leeks, potatoes and apples on a roasting tray, then coat in the rapeseed oil and melted butter.

6. Place the bacon in the centre of the veg, fat-side up.

7. Drizzle the syrup over the bacon then put in the oven for 20 minutes, turning once or twice so everything gets nicely golden.

8. Remove the bacon to rest, leaving the vegetables. Add the cider and mustard to the tray. Place on the hob and bring to a simmer for one minute to make a lovely syrupy glaze.

9. Slice the bacon and serve.

2. For the pastry, sieve the plain flour into a bowl and then add the wholemeal flour and salt.

3. With your fingers, rub the butter into the flour until it becomes a sandy texture.

4. Add a little water until the pastry comes together.

5. Form into a smooth round patty, wrap in clingfilm then chill it in the fridge for at least half an hour.

6. Meanwhile, cut the figs in half and the goat’s cheese into six circles.

7. On a floured surface, roll out the pastry into a thinnish circle, then transfer it onto a parchment-covered baking sheet.

8. Brush the pastry lightly with egg, then alternate the figs and goat’s cheese on the pastry, leaving a 3cm lip of pastry all around.

9. Sprinkle with the sugar and thyme leaves, then bring the pastry back on itself a little to cover the outermost part of the filling.

10. Brush the exposed edge of the pastry with more egg, drizzle the figs and goat’s cheese with olive oil, a few twists of black pepper and bake for 25-30 minutes, until oozing and golden.

1. Put everything into a saucepan and cook over a medium heat for 20 minutes or so, until thick and syrupy.

2. Remove from the heat, allow to cool and keep in a Kilner jar in the fridge.

Splendid isolation at the heart of Sandyford for €1.85m
4