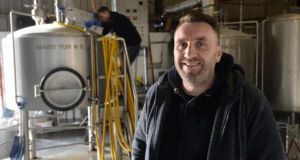 Founded in 2010, Trouble Brewing was part of the first wave of Irish craft breweries. Based in Kill, Co Kildare, they produce some of the best beers too. They have just set up a new website, says co-founder Stephen Clinch. “It has a full list of all our beers, which we have never really had, lots of background info and images of the team. We won’t sell directly to the public, however, and never have. We are very conscious that we need to support our existing customers who have been very good to us over the last 10 years.”

The website is part of a new rebranding. “It’s almost as if we are starting all over again. We were 90 per cent draft before lockdown, so we switched almost entirely to cans with the same beers as before. It took us a while to adjust – we were basically closed for a month. The landlord was great, the local enterprise board was great, and the wage subsidy really helped too.

The biggest challenge for the pubs is not about being open, it is getting people in

“At the start of October we will release our pumpkin ale in cans for the first time. Up until now it was only draft. We grow the pumpkins ourselves in an allotment. It’s a fun beer; some people really love it, others hate it”.

They will also release The Fresh Prince of Kildare, a double IPA. In the meantime, we can enjoy the excellent exotic fruity Ambush Juicy Pale Ale.

They have been supplying kegs to some pubs that serve food. “The biggest challenge for the pubs is not about being open, it is getting people in. I think that will be difficult for them, and therefore us too.

“Before lockdown, some of the bigger companies were aggressively blocking off taps and restricting what pubs can pour. It makes it tricky to make an impression. We are lucky because we’ve been around a while. In 2010 we learned on the job. There is no room for forgiveness now; you have to make a strong impression with good beer, good prices and good packaging too.”