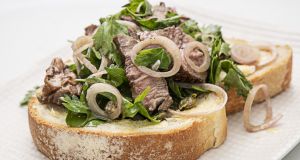 One of the finest treats in life is the toasted special. It’s a uniquely Irish thing, like Taytos. There’s nothing fancy in it, you could even ask what gives it the right to be so special? After all, the ingredients are somewhat mundane – ham, Cheddar cheese, tomato and onion.

Yet, in the right place at the right time, there is nothing nicer. I’d crawl over a mountain of nouveau-riche club sandwiches to get to a nice toastie.

This week’s piece is an homage to things on bread. I discovered what a trencher is through British chef Fergus Henderson. He plonks a roast piece of beef on a hunk of bread while it rests. The soppy delicious goo that results is almost better than the meat itself. His roasted bone marrow starter has travelled the world and caused a sensation. He offsets the marrow’s morbid richness with a salad of flat parsley, shallot and capers. Coarse sea salt gives texture. I am a magpie, so I’m combining the two, for a hybrid of deliciousness.

Bruschetta, Crostoni and Crostini was published in 1995 by another food hero of mine, Franco Taruschio from the Walnut Tree in Abergavenny, Wales. It was a seminal restaurant in the UK. It’s still there, run by another master, Shaun Hill. Go, if you ever can, it will bring tears to your eyes.

Lentils on toast is a surprising delight. I’ve added cream and salami for a bottom-widening effect. Have it by the fire with a glass of red and think of me. I’m using tinned lentils because they are pretty brilliant. If you can’t find them, cook your own. Puy lentils are best.

I had a version of the goat’s cheese on toast in The French House in Soho in January, in another world, another life. They used half a roasted new season’s garlic bulb that loomed over the bread. You prised the golden cloves out and spread them sinfully over the goat’s cheese-covered sourdough. It was one of the best starters I’ve ever eaten.

Method
1 Heat the oil in a pan until gently smoking.

2 Season your steak and carefully put in the pan over a high heat.

3 Cook for three minutes then turn and cook on the other side for another two.

4 The time will entirely be determined by how you like your steak and how thick it’s cut. I like mine medium rare.

5 Remove the steak from the pan and put it on a plate.

6 Cover with foil and keep in a warm place for 10 minutes to rest.

7 Meanwhile, butter the bread and tip the steak juices into a large bowl.

8 Whisk the mustard into the juices, then add the oil, parsley, shallots and capers to the bowl.

9 Slice the steak into strips and add to the parsley mixture, then divide on to the buttered bread.

10 Top with a sprinkling of coarse sea salt.

Method
1 Put the cream into a pot and slowly reduce by one third, taking care that it doesn’t boil over.

2 Add the lentils, balsamic, thyme and salami to the cream. Season and keep warm.

3 Toast the bread and rub thoroughly with the garlic. Put on warm plates then drizzle over the olive oil.

4 Spoon the lentil mixture on top and serve.

2 Put the garlic and thyme on some foil. Season and add the sugar. Make a parcel and just before sealing, add the olive oil.

4 Toast the sourdough then brush with the garlic oil.

5 Smear the goat’s cheese on the toast and dot the mellow golden garlic on top.

Boxing clever in Donnybrook for €825k
3