Is there room for hope in a time of climate breakdown?

One Change: Despite all the tragedy of wildfires and plastic waste, there is optimism in some of the efforts being made 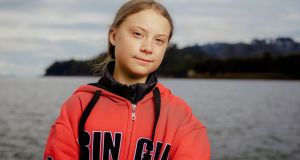 Hope is a word Greta Thunberg uses carefully – she doesn’t want the rest of us to sit back and relax. Photograph: Tom Jamieson/The New York Times

“Once we start to act, hope is everywhere.” The Swedish activist Greta Thunberg spoke these words at a Ted Talk in 2018, urging the world to wake up to the climate crisis. Unless we – individuals, businesses, governments – contribute to the effort to save the planet, she warned, there’s little chance of change.

Hope is a word that Thunberg uses carefully – she doesn’t want the rest of us to sit back and relax, leaving it to the young people to get noisy about solving a problem that previous generations are responsible for. It must be earned by action, she believes.

But it’s tricky getting the balance right with calls to action on climate – particularly when there’s so much bad news going around. Every time I write this column, I grapple with this: too many details of climate tragedy risk making readers feel disheartened (and not bothered); or the opposite, being too upbeat can seem unrealistic about the impact of one small, individual effort.

Climate change is such a complex and multi-faceted problem. Unlike tackling the hole in the ozone layer in the 1980s, for example – which was solved by banning the use of CFCs – the issues now come in many forms and require differing solutions: from wildfires to plastic waste to species becoming extinct. The task is gargantuan, the answers aren’t always straight-forward and it’s hard not to despair when everybody is not on board.

It’s worth reminding ourselves, however, that green issues are on the agenda – internationally and at home – in a way they’ve never been before. Late in September, more than 60 world leaders pledged to put climate and wildlife at the heart of Covid recovery plans. Next year the EU rules on banning single-use plastics come into force and there’s the Paris Agreement which, despite the US’s withdrawal, still holds strong as a legally binding international agreement on efforts to reduce global warming. And the Government here recently announced its climate action Bill which will impact on every aspect of the Irish economy from agriculture to green energy to transport.

Change can happen – and quickly – as the past few months have shown us, with alternative and more sustainable ways of living coming into play. Think of the increased bicycle lanes, the reduction in air pollution, discussions of “15-minute” cities and more community focus with people working from home. Polls continuously show that climate change is becoming a greater issue of concern for individuals. Recently, a study found that most Europeans want the EU to reach zero emissions by 2030, not 2050.

So are there reasons to be hopeful when it comes to tackling climate change? Absolutely. But only if we keep playing our part – and keep reminding businesses and politicians to put it top of the agenda.