Comforting noodles, an autumn salad and a chicken tray bake for the family 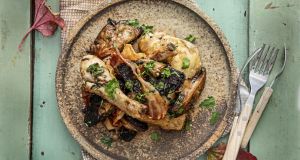 We managed to get a two-night break in a Dublin hotel recently. It was especially lovely to be on the receiving end of a bit of TLC. The city was eerie. I’d expected it, but walking the silent streets felt apocalyptic.

Still, I was glad to be there. I’ve grown to love Dublin more since we moved away from it all those years ago to set up the Tannery. My enthusiastic forays from Dungarvan have, over time, revealed aspects to Dublin’s character that I’d never appreciated when I lived there.

Our girls love breakfast in a hotel. Who doesn’t? The buffets have sadly gone but the thrill of fluffy pancakes and oozing pain au chocolat compensate.

A woman on the next table caught my attention, not for the better. Her breakfast requests were as complex as the most delicate of corporate mergers. The waiter, who must moonlight as a Buddhist monk, didn’t blink through the monologue, a consummate professional.

“One poached egg, in the centre of the plate, with brown toast and tomatoes. Nothing must touch the egg, that will ruin it.” It sounds simple enough. In fact it is, but there was more, much more to her request. My face reddened. I am that breakfast chef. I love people who love food. Who treat it as a joy of life. It is not the enemy.

This chicken dish is a family favourite and yet another tray bake, but it’s a wonderfully easy and logical way to feed your family.

I sometimes think that I don’t do enough Asian dishes. These are comfort noodles with a crunchy topping. Just the sort of thing I love to eat anytime, but especially when it’s a little chilly outside.

For a delicious autumnal dish, I’ve incorporated little morsels of charcuterie into a robust salad. The dressing is made with sherry vinegar. I’m very partial to it, but you could use red wine vinegar instead. The dressing recipe makes more than you need. It will keep in the fridge for weeks in a sealed jar. Leave the poached egg a little runny in the centre. It will ooze into the leaves. The breakfast woman mightn’t like it, but I do, and I hope you will too.

3 large Rooster potatoes, washed and each cut into six wedges

A pinch of chopped parsley

2 Put the chicken, potatoes, duck fat and thyme on to a roasting tray.

3 Season and turn everything together until coated in the duck fat.

4 Cook for 20 minutes, then remove from the oven and add the bacon and the mushrooms.

5 Put back in the oven for a further 15 minutes until the bacon starts to crisp up and the chicken is thoroughly cooked.

6 Remove the tray from the oven, season, then add the vinegar and the parsley.

7 Mix everything together, the heat from the tray will soften the vinegar.

½ a red chilli, deseeded and diced

Zest and juice of one lime

A pinch of salt

2 Put the butternut squash and sesame oil into a roasting tray. Season, mix and cook for 20 minutes, turning once or twice, until soft and golden.

3 Add the sesame seeds and spring onions then return to the oven for another five minutes while you make the sauce.

4 Put all the sauce ingredients into a pot, whisk and bring to a gentle simmer for five minutes to let everything get to know each other. Remove from the heat.

5 Cook the noodles as per packet instructions. Drain them, return to the pot then add the sauce and coat the noodles with it.

6 Divide the noodles between four warmed bowls then scatter the butternut squash mixture evenly on top. Finish with the coriander sprigs and serve.

2 Bring the vinegar, sugar and cinnamon to the boil then remove from the heat.

3 Whisk in the mustard then slowly incorporate the sunflower oil, followed by the olive oil, salt and pepper and garlic.

4 Set aside approximately one third of the dressing and refrigerate the rest for another day.

5 Put the lardons on an oven tray and cook for 10-12 minutes until crisp, then add them and their fat to the reserved dressing, along with the salami, hazelnuts and drained raisins.

6 Poach the eggs for five to six minutes.

7 Meanwhile divide the salad between four bowls, spoon the dressing over the top taking the charcuterie first as you may not need to use all of the dressing.

8 Carefully lift the eggs from the pot with a slotted spoon then sit them on top of the salad and serve immediately.

Who's that lady? The extraordinary life of the Marchioness of Dufferin
7