Me and my cookbooks: the culinary collectors who are running out of space

These cookbook lovers just keep adding to their culinary collections 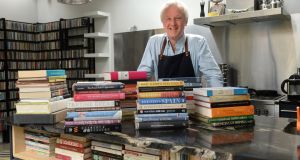 Gerry Godley, at home with his cookbooks, in Rialto, Dublin. ‘In a world full of fads, blow-ins and opportunists, my fondness for Rick Stein remains undimmed.’ Photograph: Dara Mac Dónaill

Gerry Godley is the principal of Leeds College of Music. He was previously a chef and has also been a broadcaster, a saxophonist and concert producer. He commutes between Leeds and Dublin.

“I’ve been buying cookbooks since the commis chef years of my late teens, starting with the chunky French bibles like Escoffier’s Guide Culinaire, bought on the never never from a travelling salesman at the kitchen door of The Abbot [restaurant] in Monkstown.

“I keep books by the cooks Claudia Roden, Fuchsia Dunlop, Rick Stein, and the others, as close to the stove as possible and the thinkers, Jeffrey Steingarten, Michael Pollan et al, ruminating on a neighbouring bookshelf.

“I do use them to cook from, but rarely to the letter. I see them more as a way to improve my vocabulary. Dessert is the exception, where the science is paramount, and I will measure to the gram.

“In a world full of fads, blow-ins and opportunists, my fondness for Rick Stein remains undimmed. The cookbook with the most dog ears and stains in my collection is his Far Eastern Odyssey.

“Just as a great single sends us out to buy the album, often it is a solitary recipe that brings about the book purchase. Roots by Tommy Banks was bought on the strength of his beetroot slow-cooked in beef fat, with smoked cod’s roe and horseradish. That’s genuinely creative to me.”

Ruth Healy owns Urru Culinary Store in Bandon, Co Cork. “We are home to all things culinary, including cookery books, new and antiquarian,” she says.

“I have about 500 different titles at any one time, ranging from new releases, classics, out-of-print and rarer books. The shop collection is wide, varied and evolving over the past 15 years. My book collection at home is much more concise. Generally the books are grouped according to geography or style of book. Irish cookery books get pride of place.

“I was a member of a cooking club when I lived in Japan so I have more Japanese books than you’d usually find, including the bible, Japanese Cooking A Simple Art by Shizuo Tsuji

“At home I use cookery books mainly for recipes, but a few are for context, stories and inspiration such as The Flavour Thesaurus by Niki Segnit.

“Before I buy a book, I ask myself a few questions. Would I use it and recommend it? For example The Lettercollum Cookbook by Karen Austin. Does it make a valuable contribution to food writing? For example Honey from a Weed by Patience Grey. Kerb appeal; is it beautiful inside and out? For example, How to Eat a Peach by Diana Henry. Will it sell? I stock all the main TV chef releases but I make a particular effort to convince customers of the books needing to be “discovered” too.”

Kristin Jensen is a freelance editor, food writer and chair of the Irish Food Writers’ Guild, who has worked on nearly 100 cookbooks

“For a cookbook editor, I don’t have as many books as you might think. About five years ago we did a ruthless clear-out and that included a lot of my books, which was a big deal. I’ve also become a big fan of the library and half of the books that I check out are cookbooks. So that leaves me with about 200, though of course that number is always creeping up.

“I’ve been collecting cookbooks for about 20 years, starting when I moved to Ireland from the US, one week after I graduated from college. The first cookbook I bought that made a lasting impression [on me] was Nigella Lawson’s How to Eat. I’d just moved to Ireland and was still feeling my way in this new food culture – I’d spend ages in the grocery store just looking at everything on the shelves, learning all the new brands and different foods. I’d never even heard of things like soda bread or Sunday dinner, so that book was a window into a new world.

“The cookbooks I use most often are in a single bookcase in the kitchen. The cookbooks that I’ve worked on and ones that I use more as reference are in the living room, with some novels thrown in for good measure. The overflow and library books are usually piled up on coffee tables, windowsills and stacked on the kitchen counter. I keep books by the same author together – I have a whole shelf just for Nigella and Nigel [Slater].

“I don’t focus on any particular subject, though like a lot of people I’ve become more interested in Middle Eastern food in recent years. I don’t have any rare or particularly unusual books, though I do have a lot of signed cookbooks; my most prized one being the new edition of The Ballymaloe Cookbook that Myrtle Allen signed for me.

“I love good photos and a little lifestyle escapism as much as the next person, but when I buy a cookbook, it’s all about the recipes. I cook dinner from scratch every night, so I’m always looking for meals that are fairly quick, uncomplicated and that the kids will eat. They’re not picky eaters, but vegetables are still a hard sell.”