Keep cynic’s hat on when it comes to cereals

Breakfast staples seek to ‘help’ with colours, shades of grey and traffic lights 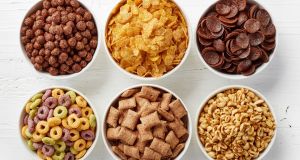 Manufacturers often refer to the number of kilocalories per serving, but when you check out the serving size it is often quite small

When it comes to ingredients, many popular breakfast cereals get a bad rap given their high sugar content.

But what do the labels tell us that might help us to choose wisely?

The most honest box on the supermarket shelf is probably the one housing Marshmallow Mateys, a multicoloured “sugar-frosted whole grain oat cereal”. It says on the back of the packet, “Warning: The contents of this package are delicious and easy on your wallet.”

So it is cheap and probably sugary.

And so it proves as the product has 41g of sugar per 100g. To put that in context, boring old-fashioned Weetabix has just 4.4g and Kellogg’s Crunchy Nut Cornflakes, which are covered in honey, have 35g per 100g.

Of course, that refers to all sugar in some highly processed products, not just added, but to lend further context, a bar of Dairy Milk has about 56g and McVities Chocolate Biscuits have about 30g of sugar per 100g – and who would consider handing those to their children for breakfast?

This colourful cereal could also be considered a “source of fibre”, according to guidelines from the Food Safety Authority of Ireland as it has 4.8g of fibre per 100g, which is well above the 3g level needed to make that claim. With 1.7g of salt per 100g, however, it is far above being able to call itself a low-salt product which is for those cereals with 0.3g per 100g or less.

At the other end of the spectrum are the more popular breakfast staples, such as Weetabix.

From the style of the packaging, it seems that Weetabix has hardly changed over the past 30 years. The colour, pictures and typeface are much the same as they always have been.

The big difference is a panel on the front with five ‘boxes’ four of which are green and one white. This panel is often called the traffic-light system, because of the colours used.

It lists energy, fat, saturates, sugars and salt, with each box in an appropriate colour. Energy goes in white. When the ‘fat’ box is red, for example, it indicates that the product is high in fat. Amber means it has medium levels. If it is green, it indicates it is low in fat. The idea is to allow people to see at a glance whether it is a healthy choice.

The system has been in use for a few years now in the UK, but it is not mandatory. So some companies such as Tesco and Weetabix use it on their products, while others do not.

Many dieticians do not like the traffic-light system anyway because they fear that consumers will be put off buying products, which are high in fat, though very nutritious. “It’s too simplistic,” says Richard Burton, director of the Irish Institute of Nutrition and Health. “Cheese is always red.”

Look at some other cereal packets, however, and you will notice that the panels on the front of their boxes are different colours, such as grey, blue or orange. These have no standard meaning.

Nestle’s Original Shreddies lists all information in a dull shade of grey, despite the colourful packaging for the wheaty breakfast bites, giving the impression there is nothing interesting to see here, just some dull nutrition information.

Kellogg’s All-Bran has coloured every box a bright shade of blue. It could have given itself a green light for fibre with 27g in every 100g and claimed to be a “source of protein” with 14g, but it’s not playing the game.

On the side, the All-Bran packet also helpfully tries to explain the reference intakes listed on the front. It explains that 130kcal/560kj is the “amount of energy per bowl”.

This serves to highlight another problem with wording on packages. Manufacturers often refer to the number of kilocalories per serving, but when you check out the serving size it is often quite small.

So, for example, most cereals list serving size as 30g or 40g, which is the size of those little packets found on hotel buffets.

So take that into account when considering calorie count.

Are they trying to help or to confuse?

I’d say keep your cynic’s hat on at all times.