The musicians suffering for their art in Austin, Texas 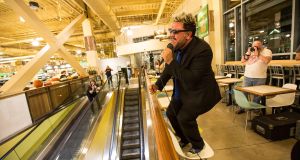 Nakia and the Blues Grifters: “[The Health Alliance for Austin Musicians] has played a major role in cultivating the Austin music scene by keeping artists healthy and on stage. If you’re not sick you won’t have to miss a gig.” Photograph: Ben Porter

Some say all true art comes from suffering. Reenie Collins from the Health Alliance for Austin Musicians (HAAM) would argue the contrary. “A happy, healthy musician is going to be more prolific and better equipped for the pressures of touring,” she says. “People underestimate just how much musicians must give up in order to perform their craft.”

Aside from the pressures of going on the road – playing gig after gig, night after night, sleeping intermittently in the back of a van on the way to the next town on the tour schedule, the Executive Director of HAAM says it is not simply about the stresses associated with touring.

“When you’re committed to music as a career, it can take its toll on you physically, mentally and emotionally,” she says. “Many musicians give up so much to perform their craft and all too often this is taken for granted.”

For the last five years, Collins has been at the helm of a unique NGO committed to providing physical and mental healthcare services to the growing number of musicians now living in a city which has dubbed itself the “live music capital of the world”.

While Austin, the capital of Texas, prides itself on this reputation, music – like any other industry – is subject to the fundamentals of economics. If the supply of creative output exceeds demand, many artists, no matter how gifted, will suffer. “Our membership has grown by 15-20 per cent annually for the last three years,” says Collins.

The increasingly desperate economic situation for musicians living in the city was put into sharp focus in 2015 when a survey conducted by the City of Austin revealed almost a quarter of all musicians residing there lived below the federal poverty line. The Austin Music Census also found nearly two-thirds of those surveyed earned less than $18,000 (€14.5k) per year and a fifth of all local musicians couldn’t afford health insurance.

Like many charitable organisations in the United States, HAAM is funded almost exclusively by donations from the public and private foundation grants. It has taken on more than 800 new members in the past 12 months alone, bringing the total number relying on its financial support to just under 2,500.

The only thing harder to find than a critic of the pig-tailed country music legend is a Texan with a positive outlook on the US healthcare system.

This, however, is not uncommon anywhere in the country. Off the record, The Irish Times spoke to several healthcare professionals who admitted even they struggled to navigate their way through the Byzantine mechanics of American health insurance.

One aspect of the system is simple to understand though: it ain’t cheap.

Medical costs – whether for routine GP visits, or more serious situations where emergency care is needed – are significantly higher in the US than in Europe. Paying for healthcare is reportedly the number one cause of bankruptcy in America. (On average, a visit to the emergency room will cost $1,265 (€1,021); treatment for a broken foot could set you back as much as $16,000 (€12.9k), while more serious conditions, such as cancer treatment, can cost $30,000 (€24.2k).

Those who can afford health insurance are not subject to these high costs and pay only a small fee, or copayment, to visit a doctor or hospital. Similar to the Irish system, many US citizens will be entitled to some level of health insurance through their employer, who generally pay a portion of staff’s monthly premiums.

The poorest in society can qualify for state and federally-funded Medicaid, while those aged 65 or older can pay subsidised premiums entitling them to Medicare.

The self-employed, however, generally must pay for their own insurance, which can run into the thousands annually, even for the most basic care.

While the Affordable Care Act (often referred to as Obamacare), first introduced in 2010, is widely credited with reducing the number of uninsured Americans overall by 50 per cent, several states, including Texas, opted out of certain key provisions within Obamacare designed to benefit those most in need of financial support.

This has left many Texans – earning too much to qualify for Medicaid and too young to access Medicare – unable to benefit from the federal subsidies enjoyed by fellow citizens in neighbouring states provided through Obamacare.

So many take their chances and just go without insurance completely.

Most professional musicians tend to be self-employed and, as Austin’s reputation as a live music hub draws increasing numbers to the city, local bookers and venue owners know they can exploit an oversaturated market by frequently offering either negligible recompense for live performances, or no payment at all. Because if one musician refuses to play on account of inadequate pay, there are dozens of others waiting to take their place.

“Low-cost healthcare should be accessible to anyone who needs it in a society as wealthy as the United States,” says local musician, singer-songwriter and actor, Nakia. “Artists tend to struggle more than most and HAAM helps identify those most in need and find ways to get them the care they need. It has played a major role in cultivating the Austin music scene by keeping artists healthy and on stage. If you’re not sick you won’t have to miss a gig.”

Given the contribution Austin’s live music scene makes to the local economy, some believe government officials should be playing a far more active role in supporting the welfare of the music community rather than leaving it to outside organisations.

Austin City Council member Jimmy Flannigan recognises the role these organisations play in sustaining one of Austin’s most treasured institutions – a live music scene. “It’s at the core of what makes this city the vibrant and attractive place it has grown to become.

“It’s frustrating, though, that local government doesn’t simply do its job and protect the most vulnerable in our community, especially our community of local artists and musicians who have contributed so much to the city. Instead organizations like HAAM are left to do what our city officials should’ve been doing in the first place.”