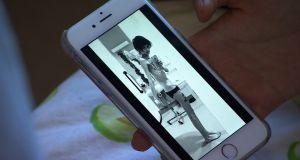 Connie Inglis was given weeks to live due to her severe anorexia. Photograph: Connie Inglis/BBC/PA

A student who was given weeks to live due to her severe anorexia says she used social media to spread the message that “no matter how hard it gets, they can always get better”.

Connie Inglis (23) was sectioned two years ago and admitted to hospital as she weighed the same as an average five-year-old.

Now, Ms Inglis has used Instagram to create a visual record of her recovery and has more than 87,000 followers.

She told BBC Inside Out how she could not leave her bed at St James’s Hospital, in Leeds, without a wheelchair and was fed by a tube.

Miss Inglis said her social media story is intended to inspire body confidence.“I really love helping people and I think that it’s really important for people, those going through recovery especially, to realise they’re not alone in their struggles. No matter how hard it gets they can always get better.

“I think people follow me because I try to be truthful on my account rather than just show the positive sides of recovery. I show a lot of the negative sides and how hard it is.”

Recently, the HSE launched a new model of care for the treatment of eating disorders. As part of the plan, adult and child eating disorder teams will be established who will develop hubs throughout the country, to deliver in-patient and out-patient services. Eating disorders affect up to 5 per cent of the Irish population and anorexia nervosa has the highest mortality rate of all of the mental health conditions.

Miss Inglis, who is in her final year at Leeds Arts University, has struggled with anorexia since she was 10 years old, and has been hospitalised three times in nine years.

She said the NHS does not have enough cash to fund treatment for the underlying issues that have caused her eating disorder.

“It’s very annoying because it seems like if I’m not starving myself then no one is going to take me seriously.”

Miss Inglis told the programme her final university project is examining the pressures on women to be thin using Barbie and Bratz body pieces made from boiled and coloured sugar. “If Barbie was a real woman she would not have half her organs, she would be classed as severely anorexic if not dead. It’s just ridiculous.” – PA

– Miss Inglis’s story will be shown in Yorkshire and Lincolnshire on Monday evening on BBC One. The programme will be available to watch on the BBC iPlayer.