Jennifer O’Connell: My week as a vegan

The rise of the vegan diet has helped highlight the choices we make in the restaurant or kitchen. But what is the best diet for you, and how can your choices help save the planet. Video: Kathleen Harris 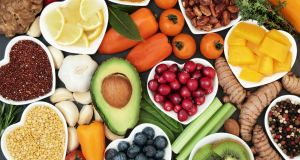 A recent report in Nature suggests adopting a flexitarian diet and cutting down to just one portion of red meat a week.

I’m 24 hours into my experiment in veganism when I make my first mistake. I reach into my bag and mindlessly grab a Triple X mint. Only after I’ve eaten it does it occur to me to check the label. The first two words I read are “beef gelatine”.

Even for a temporary vegan, the thought of boiled-up cow bones and ligaments in my favourite brand of mints is repulsive.

Interest in eating vegan, vegetarian, or even flexitarian – also known as “casual vegetarianism” or just cutting down on meals that involve meat – is on the increase internationally, driven by concerns of climate change and health warnings about the effects of red meat.

A recent, widely-publicised study in Nature suggests that limiting climate change, reducing water scarcity and pollution will demand that more of us adopt plant-based diets. Plant-based diets alone won’t save the planet: food waste will need to be halved and farming practices need to improve.

But if we don’t make drastic changes – the report suggests adopting a flexitarian diet and cutting down to just one portion of red meat a week – population increases mean “the environmental effects of the food system could increase by 50-90 per cent . . . reaching levels that are beyond the planetary boundaries that define a safe operating space for humanity”.

Former president Mary Robinson is among those urging us to consider going vegan or vegetarian to save the planet.

It was the “safe operating space for humanity” that convinced me. I decided to start by going vegan for a week to see how easy it is. (I could have saved myself the trouble by asking any vegan: the answer is not easy at all.)

The first thing going vegan involves is reading a lot of labels. Things off the menu include the obvious (meat, dairy and eggs) as well as the less obvious (honey, some chewy sweets and jellies, and lots of beers and wine, which traditionally used milk proteins and egg whites as fining agents).

Even avocados, almonds, kiwi, butternut squash and melon are on the banned-if-you’re-being-totally-purist-about-it list, because they rely on migratory beekeeping. Strict vegans point out studies that have shown that the stress on bees of being transported long distances can adversely affect their health and lifespan.

Along with worrying about bee stress levels, temporary veganism also involves a lot of planning ahead, and involved discussions with restaurant staff. My sister-in-law, who has been vegan for years and glows with good health, warns that “eating out in Ireland involves a lot of chips and side salad”.

My husband decides to join me for a week. He lasts one morning, and then he goes out to lunch in a pub. He asks if there’s anything vegan on the menu. No problem, the woman waiting tables says. “Sure, I’ve two of them at home.” Then she brings him a mushroom risotto made with cream covered in cheese.

At a work-related reception dinner in a hotel later that evening, I do only slightly better. The starter is a melon plate, which looks so delicious that two of the non-vegans at the table send their goats cheese starter back and order it instead. Then my vegan main course arrives: it is a mushroom risotto made with cream and covered in cheese. Luckily, in the spirit of planning ahead, I have already had some leftover vegan curry at home.

I become very familiar with the scourge of the desultory-sounding stuffed Portobello mushroom.

According to Bord Bia, about eight per cent of the population are vegetarian, and two per cent are vegan. Could that be an underestimate? In every restaurant I eat in during my week of veganism, I ask whether they’ve noticed an increase in enquires for vegan options. The answer, everywhere, is yes.

Aveen Bannon, a consultant dietitian, sees two groups of the vegan-curious. The first “are passionate about nutrition, the environment or health and want to look for healthy alternatives and ensure a balanced diet”. The second group are “those who do it for weight loss, and don’t embrace some of the alternatives” .This is a worrying trend, particularly common among teens, she says.

Despite the growing interest in veganism nationally, I notice that where there is a vegan or vegetarian option on a restaurant menu, it is invariably the last thing listed. I become very familiar with the scourge of the desultory-sounding stuffed Portobello mushroom.

But there are some hits. I have a delicious vegan cooked breakfast (not on the menu, but they happily offer it) at the Grow Café in Waterford, involving kale, mushrooms and roast root vegetables like sweet potato. It is gratifyingly filling. A few days later, I have a vegetable curry at the Stella Maris in Kilkee, Co Clare. Rich with coconut milk and gentle spices, it may be the most delicious thing I’ve ever eaten. Or maybe I’m just very hungry.

That’s the other thing about being vegan. I am hungry almost all the time. Bannon says this is not usually the case. “As people start a vegan diet they sometimes can find they feel full quickly and may lose weight” due to the high quantities of fibre they’re consuming. She suggests adding “good calorie-dense snacks like nuts and nut butters to help fuel your body”.

She adds that as a dietitian, she doesn’t recommend specific lifestyle diets “as it is a personal choice. That being said, we do encourage people to include plant proteins in their diets. They are nutritious sources of protein and tend to be high in fibre. There is research that indicates reducing our overall intakes of meat and dairy will help with sustainability, so it is something to consider. When it comes to dairy alternatives, you need to ensure it is fortified with calcium and preferably contains protein.”

Walsh’s advice about veganism is that “it can be a healthy diet. However, it’s not nutritionally complete”. She says that it doesn’t provide the omega 3 fats EPA and DHA that most of us get through oily fish. These can be taken as supplements. She also recommends supplementing with vitamin D and Vitamin B12.

“Some people, especially women, may need to take an iron supplement.” If you’re not consuming seaweed, you may lack iodine, which is usually provided by dairy and fish.

Overall, Walsh says, following a flexitarian diet can encourage us to try new foods “such as beans, peas and lentils”. But she warns against seeing meat and dairy as “bad foods”. “They offer lots of important nutrients, naturally, and provide many health benefits. For example, although the likes of almond milk is used as an alternative to milk, it’s not nutritionally equivalent. It doesn’t contain a meaningful amount of protein, and lacks lots of the vitamins and minerals that are naturally found in milk.”

At the end of a week of veganism, I’ve lost 1kg, or 2lbs in weight, which seems a high price to pay for being hungry all the time. I do feel less bloated though, and I go down one jeans size.

More importantly, I’ve expanded my repertoire of recipes to include more plant-based meals which, for someone who is roughly 97 per cent chicken, can’t be a bad thing, from either a health or environmental perspective.

I can’t see myself ever going fully vegan or vegetarian, but I’ll happily become flexitarian.