I’ve been trying to eat less meat, but now I like it more than ever

One Change: My six-year-old daughter still loves her ham sandwices 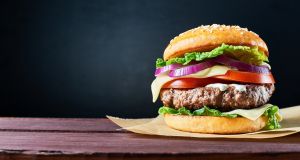 New alternatives, such as the Impossible Burger, are being hailed as one way forward. Photograph: iStock

I’ve been trying to eat less meat over the past few months, though progress has been a little slow. It’s not that I was expecting to become a devoted vegetarian or vegan overnight, but I thought by this stage I’d like meat a whole lot less. Or that I’d shudder at the idea of having a steak or a roast chicken for dinner. The opposite is true, and I’ve even started to wonder if reducing my meat consumption has made me appreciate it more.

But how important is it to change? The report from the Intergovernmental Panel on Climate Change (IPCC) in August strongly advocated we switch to a plant-based diet, particularly in rich countries, citing the impact of emissions from methane produced by cows. Moving away from cattle farming would also free up land to grow other crops and encourage reforestation, it stated, particularly in places like the Amazon which acts as a carbon sink to cool global temperatures.

I prefer the approach of slowly reducing my meat intake, while making more use of what already exists

So reducing our meat consumption is fundamental in the fight against climate change – we just have to be clever about how we adapt. Though it’s worth bearing in mind that it’s not so long ago (perhaps a few generations in this country) that we used to eat meat only once or twice a week, when the Sunday roast was a real treat. Now we’ve just become used to meat always being available.

New alternatives, such as the Impossible Burger, are being hailed as one way forward. These plant-derived burgers imitate the texture and taste of meat and are much less carbon intensive in production, which is all very positive. But I prefer the approach of slowly reducing my meat intake, while making more use of what already exists, such as beans, pulses and vegetables. And doing my best to use fruit and vegetables that are in season, and keep food waste to a minimum, which is all central to changing our food culture.

While spaghetti bolognese or chicken stir-fry will always be a fallback, I’ve tried reducing meat portions per person

While I used to eat meat roughly about five times a week, I’d say I’m down to about two or three times now. When I do buy, I try to get it from to my local butcher. And while meals like spaghetti bolognese or chicken stir-fry will always be a fallback – especially for children – I’ve tried upping the vegetable content and reducing meat portions per person.

The ham sandwich has remained a tricky one, however. Despite many attempts at introducing alternatives, my six-year-old daughter is not to be swayed. A few times I’ve baked and sliced a ham to avoid those awful black (unrecyclable) plastic packets. And though it’s not perfect, it is slightly better, which is all we can do sometimes.