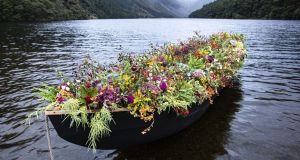 Wild flowers foraged in the west and photographed in Glendalough

The language of flowers may be eloquent, but making floral short stories pushes the craft of floristry in imaginative new directions.

“A florist is someone who is addicted to flowers – it’s a vocation,” says Ruth Monahan, founder of Appassionata Flowers in Dublin and the author of a visually exciting new book called Blathanna: Irish Spaces in Flower. She describes it as a “playful work with flowers ... and the magic that can be conveyed when artistic vision meets a deep knowledge of flora and understanding of space.”

The book features spectacular displays of seasonal blooms in diverse locations all over Ireland – the cover shot of a currach laden with native Irish flora foraged in the west, anchored in the middle of Glendalough Lake, is one of the more striking.

Monahan exchanged a career in television production for one in floristry, training at the McQueen school in London before setting up Appassionata in Dublin in a small kitchen with her partner Ultan Devaney, who is now her husband and chief financial officer of the company. Well known for her artistry, Monahan was responsible for outstanding displays for the visits of US president Barack Obama and Queen Elizabeth.

Appassionata caters for both public and private clients from a studio in Cumberland Street, with shops in Clarendon Street and Cornelscourt employing more than 25 people, including three French florists. In France, Monahan points out, you cannot practise as a florist without a horticultural degree.

The book is a natural outcome of 15 years in business and is a collaboration between her, Devaney, and her creative director Kasia Skopinska, who she has worked with for more than a decade. Photography is by her sister Yvette and her husband Sean Breithhaupt.

Skopinsk,a who grew up on a third-generation flower farm in her native Poland, has an MSc in horticulture, plant protection and dendrology, and her background as a flower grower informed many of their stories and ideas. “We chose spaces, some well-known some we just loved, some we found along the way but all of which inspired us as we started to piece together which flowers would work in each space,” Monahan explains.

Each of the 19 chapters showcases their imaginative styling, which oscillates between flamboyance, minimalism and the boldly decorative. There is also a history of each place chosen for the shoot, and a list of the flowers used. One of the most dramatic scenes is a holiday home in Mullaghmore; Monahan, who is from Rosses Point, is drawn to the landscape and poetry of her native Sligo, where her grandmother’s love of gardening was a seminal influence. “She always had fabulous blossoms,” she recalls. “Sligo is so rich – so many wild orchids, thrift, anemones, bluebells and irises.”

Quotations from Yeats about Sligo abound, like one describing the county as “a great place for fairy pillaging”.  There’s a flower arrangement beside a passage tomb in Carrowmore, another a 20 metre garland around Tawley Rock, a secret Mass rock which she once dressed for a wedding, and Streedagh Strand, where she decided to create “a Moon-gate style doorway to Ben Bulben, as an ode to the fairies”.

Other locations include Visual Carlow, a leading contemporary art gallery which prompts comments on global warming, the dearth of locally grown flowers in Ireland, and threats to the bee population. There is also the dramatic crowning of the Temple of the Four Winds in Altamont with roses, as well as arrangements at Huntington Castle in Carlow, a private house in Bray, an outdoor table at Cloghleagh Bridge in Wicklow, and many others.

Monahan and her team regularly dress public places like the Westbury Mall and Restaurant Patrick Guilbaud, but they also get into buildings that most eyes never get to see, “so we thought we should make use of this privilege and have some adventures”, she says.  King’s Inn is dressed weekly by Appassionata, and to match the “moodiness” of the interior for the book, the smoke bush shrub was used like a long dusky train along the steps of the grand staircase in one of the chapters.

Monahan cites British architect Ilse Crawford, who believes in the positive emotional effect of harmonious surroundings, and florist Constance Spry (who spent a lot of her time in Ireland) as inspirational figures. Spry’s use of wild flowers and weeds alongside expensive tuberoses for her displays was considered unorthodox in the 1950s, but has had a far reaching effect on modern floristry.

“Studies show that flowers and plants in the workplace ... brighten the day and boost cognition,” Monahan writes. “We make use of a mix of native flowers and flowers from all over the world. We believe that our flowers can help soften, shape and add finish to interior architecture.”

Blathanna: Irish Spaces in Flower by Ruth Monahan, Kasia Skopinska and Ultan Devaney is published by Carrowmore on November 19th.