Grannycare is no solution to childcare crisis

What happens to the magic when being a grandparent becomes an obligation instead of a pleasure? 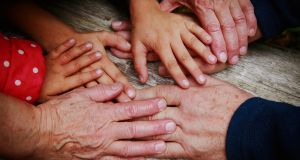 In good hands: grandparents shoulder a lot of the childcare burden. Photograph: iStock

My parents have a lollipop tree in their bathroom. It is a toothbrush holder in the downstairs bathroom that miraculously sprouts lollipops whenever their grandchildren visit. The five-year-old barely says hello at the front door before she charges off to check if the lollipop fairy has been. She emerges from the downstairs loo with her fists aloft and full of Strawberries and Cream Chupa Cups which she knows she’ll be allowed to eat before dinner. Grandparents’ home; grandparents’ rules.

Grandparents are magic. Being a grandparent, I’m told by the people who know, is magic. It’s all of the picnics, baking, library trips and – this may just be my mother – yoga lessons, with none of the bills, driving, screentime rows, or the obligatory membership of 79 different WhatsApp groups.

Grandparents are a gift to grandchildren too, a gift that goes on giving long after the grandparents are gone. I frequently talk about both my grannies to my children – how one was an entrepreneur before her time, and how the other could kill a wasp with her bare hands and was pathologically unable to resist a bargain. I recently took my artist grandfather’s sketchbook down from the shelf, and my oldest daughter and I followed his 30-year-old, step by step instructions on how to draw a boat. I haven’t heard his voice for 16 years, but it was there in my head that afternoon, telling her that if she can see, she can draw.

But what happens to the magic when being a grandparent becomes an obligation instead of a pleasure? When taking their grandchildren for an afternoon here and there isn’t here and there, but all day, every day? When looking after your grandchildren isn’t an indulgence for everyone, but a vital cog in the precarious edifice that is the dual-income family’s childcare arrangements?

A recent ESRI study entitled The Ageing Workforce In Ireland finds that “relatives, predominantly grandmothers, provide a significant proportion of childcare in Ireland”. It found that 7 per cent of those who leave the workforce between the ages of 55 and 59 do so to care for someone else. And five times more women leave than men. In 2016, 16 per cent of primary school age children were cared for by an unpaid relative or friend.

The data led to the usual round of griping about “parents taking advantage of grandparents”. Judging by the emails I sometimes get, some of this is well founded. There are more than a few disgruntled grandparents out there. They love their children and their grandchildren, they write apologetically. But they never expected to spend their third age working as unpaid childcare providers. They’re right to feel taken for granted. But it’s not necessarily their children who are exploiting them.

The findings came on the back of another set of figures which shed some light into why women in their 50s might feel pressured to leave the paid workforce to care for their grandchildren. Average childcare fees nationally have risen again, and now cost €184 per child per week. In more affluent parts of Dublin, it’s €265. The reality is that women in their 50s are leaving the paid workforce early – with all of the implications for their pension and benefits that implies – to care for their grandchildren, because they know that if they don’t do it, everything will fall apart.

Meanwhile, the State is doing what it has always done: relying on the unpaid labour and unrecognised goodwill of a workforce of women to keep the economy afloat. There are granddads who provide invaluable care for their grandchildren too, many of them on a daily basis. But the phenomenon of adults – some of whom should have another decade to go before retirement – quitting work to care for a relative is a predominantly female one.

The Independent Alliance’s proposed granny grant of €1,000 a year – which would have taken the form of a self-assessed payment available to grandparents who care for their grandchildren for more than 10 hours per week – might have been a nod towards recognising the work grandparents do, but at about €1.90 an hour, it would have been a very small one.

What we need is better and more affordable childcare solutions that don’t rely on grandparents at all. Thanks to changing social norms, women of my generation typically have more opportunities, greater earning potential and more intense economic pressures than our mothers did. We’re less likely to be available for grannycare in our 50s or 60s.

We also need more flexible working options that allow everyone – mothers, fathers and, if they are in a position to do so, grandparents – to pitch in, without anyone having to sacrifice their career or all of their freedom in the process. We need to recognise that – unlike lollipops – childcare solutions don’t grow on trees, and start actively planning for them.