‘People asked did she leave a note? What did she say? That is unbelievably intrusive’ 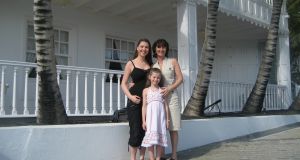 Karla, Helena and Suzanne, who was just 10 when Karla died.

“We live in a cluster area,” Helena Tubridy, fertility coach, therapist and mother of two, explains as we begin our conversation. “I could not walk up the street without meeting a suicide bereaved mother.”

“I had actually counselled two of them. I know it sounds mad but I had an idea, kind of, what it’s like. “But,” she adds, “I never expected it.”

Helena’s eldest daughter Karla was just 17 when she died. Karla loved family gatherings, socialising with friends and was good-humoured and mellow, her mum explains.

“She was very into scouting. She was a very high achiever in school and she was an absolutely astonishing cook,” Helena continues. “She was a very mature type of person for her years. Great fun, full of life, laughter, very quick-witted.”

Describing the relationship between her daughters, Helena adds that her youngest child Suzanne didn’t just lose a sister. “Karla was six-and-a-half years older than her, and a real mother.

“But she was bullied at school. Ostracised.”

As a result Karla left school at 17 and began working for an optician.

“The bullying thing was deeply distressing,” Helena says. And though Karla was happy working, “she was trying to find her way in an adult world. She was good, she was valued but it was a different trajectory. At that stage, she was a bit lost really and I thought taking the time would be good and I never expected this. I suppose I should have realised it was coming up to the Leaving Cert time, which is a big marker.”

I’ll never forget being asked ‘did you not try CPR?’ I’m a nurse, she’s dead. CPR really wasn’t an option

On the day Karla died, Helena, Karla and Suzanne went swimming. They had been shopping for holiday-wear the day before as they were due to go to France for their regular vacation.

“Karla and I had a sauna. We came home and we were starving hungry. And most unusually, because none of us really liked cheese, but for some reason we got the goo for cheese on toast, and we literally stuffed our faces at about 4 o’clock. And then I was working, Susie went out to play.”

Shortly afterwards, Helena was disturbed by her husband calling for her to come quickly, that there’d been an accident. He had found Karla dead.

“I called the police. I didn’t know what to do. Time lost its usual meaning. We were interviewed by police for about two hours, not that day, but soon afterwards and I’ll never forget being asked ‘did you not try CPR?’ I’m a nurse, she’s dead. CPR really wasn’t an option and at that time I was crystal clear.

“Karla’s death was a complete and utter devastating shock. The first thing the doctor did was hand us sleeping tablets, the three of us. The first night, we took them and we woke up like people in an opium den. We were fogged and miserable and the realisation hit us again. It was horrific, to feel drugged and to face it all over again.”

People asking, did she leave a note? What did she say? That is unbelievably intrusive

With the exception of a few very good friends, Helena says people dropped off instantly after the funeral, leaving her and her family feeling very lost and alone.

There were lots of “insincere hugs and promises of ‘I must get in touch’ and then you never hear from them again”, she says.

Some comments and remarks Helena heard in the aftermath of Karla’s death were difficult to bear.

“The relative who said ‘I’m not jealous of you any more’. I am obviously a brilliant actor because I stood there and nodded and smiled back,” she says.

“Because my beloved, adored, fabulously amazing girl was dead I was now changed. I was less statused. I found that just incredible.”

Suzanne, who was just 10 when her sister died, was advised by a family member “to be strong for her parents” and so she didn’t cry. “She ended up having a perfect appendix taken out,” which Helena says was caused by “the stuffing down of feelings. It was quite a while before I realised it”

Questions also overstepped the mark. “People asking, did she leave a note? What did she say? That is unbelievably intrusive.”

There is a feeling of being “othered”, she says. “Other bereaved parents will say things like ‘my child died in a car accident’. They will always qualify it wasn’t suicide. Suicide is a lesser death.”

Helena’s focus after Karla’s death was on Suzanne and ensuring she had as normal and happy a life as possible. She returned to work four days after Karla died, “because we had to eat”, she says.

Education played its role in Helena’s healing, particularly Saor-Ollscoil na hÉireann as did Kitten Cottage Animal Sanctuary, which Tubridy says helped her through “the dark days”.

“We found navigating our own way was really the best thing, and going with what we were feeling. The loss, the horror, the shock, the emptiness, the missing her.”

Helena is a “great believer in humour, to get a break from grieving”. This year, to mark what should have been Karla’s 28th birthday, she and Suzanne went to Edinburgh to see Celeste Barber where they had “the best fish and chips ever and a fried Mars Bar. Karla would have been horrified at the Mars Bar idea – and probably a little bit horrified at Celeste Barber,” Helena laughs.

“Your life has a different trajectory. Your mind is busy cataloguing every memory you’ve ever had. As a parent, it does feel like the ultimate failure, so you are really analysing, doing a forensic on everything and I was very lucky. Every day started with a hug and a kiss and every day ended with a hug and a kiss. She was a very beautiful presence.”

How to give support

Josephine Kieran, bereavement co-ordinator at Pieta House, offers some advice on supporting families who have been bereaved by suicide.

– Be mindful that in supporting a person or family, you’re in it for the long haul. Grief and loss is not like an illness that will be over in a few weeks, months or even by the first anniversary.
– Offer practical support: cooking dinners, getting the groceries, mow their lawn, offer to do the school run. Where possible, we should do what we can without being asked.
– Don’t use the word ‘commit’ as this can have connotations that their loved one did something wrong. A more gentle way to describe what has happened would be to say died by suicide, ended their own life.
– Don’t use platitudes, ‘if I were you’, ‘time will heal, ‘they are at peace now’. These are unhelpful and can cause the bereaved to feel misunderstood.
– Listen without judgement. Empathise, acknowledge what has happened, show compassion and validate their feelings.
– Remember their loved one by name. Share your memories or photos

Mary McAleese: ‘I’m a bit of an ’oul interrupter. That’s what I hope to be’
8

Tanya Sweeney: It was never my place to ask why she wanted to die
9