White bread is a no-no, often made with undesirable additives and preservatives 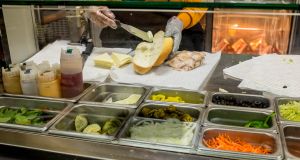 Butter is a natural product, and it tastes better too

Pick: Brown is definitely best, and the closer to wholegrain it is, the better. If there is no wholegrain bread on offer at the deli counter, buy a wholegrain loaf, such as McCambridges stoneground wholewheat (it comes in a resealable bag so you’ll be able to use it over a number of days), and purchase the sandwich fillings on their own.

Avoid: White bread is a no-no, often made with considerable amounts of undesirable additives and preservatives. The same goes for wraps, choose brown over white.

Pick: The butter versus margarine debate continues. The current Department of Health approved Food Pyramid recommends low-fat or “light” spread (in small amounts). But butter is a natural product, and it tastes better too. Just use it sparingly.

Avoid: That white, lardy-looking spread that comes in a giant tub and tastes of precisely nothing.

Pick: Mustard is a great choice of condiment, being low in calories and also offering health benefits as it contains minerals including calcium, magnesium, phosphorous and potassium. Not all mustards are made equal though. English, French and wholegrain mustards are a better choice than American, which, depending on the brand may have added sugar.

Avoid: Mayonnaise is high in fat and calories – 680 per 100g, as opposed to 66 per 100g in the case of mustard. A single tablespoon smeared on your sandwich will add around 90 extra calories to your intake.

Pick: Fermented pickles such as kimchi and sauerkraut are good for the gut. The gherkins you’ll find on a deli counter are more likely to be quick pickled in vinegar rather than naturally fermented, but they’re still a better choice.

Avoid: Chutney and relishes can contain large amounts of sugar.

Pick: Chicken (or turkey) is a better choice than ham or salami. Lean white-meat protein is lower in calories – so long as you don’t go for the crumb-coated deep fried chicken “fillet”. Choose chicken that most closely resembles a normal, cooked chicken, ie not too heavily processed.

Avoid: Salami is high in fat, and ham may have considerable amounts of preservatives such as nitrates and nitrites added.

Pick: Brie has less fat and calories, according to Paula Mee, than Cheddar. But bear in mind that a serving should be no larger than the size of a matchbox.

Read: Deli counter - where is someone looking to be healthier to start?