Can we reverse Type 2 diabetes? Yes, we can

The incidence of Type 2 has more than doubled between 1998 and 2015, so eradicating the disease has enormous appeal 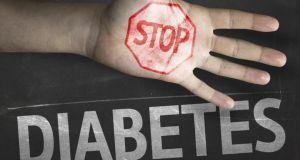 Cure can be an elusive goal in medicine. Many diseases are chronic so that realistic goals are about managing illness and preventing any future complications that could arise. Silver bullets are rare.

So to hear doctors and nurses debate the question: is it possible to eradicate diabetes was quite a surprise. The first reference to the possibility I came across was a recent keynote talk at the annual conference of the National Institute of Preventive Cardiology in Galway titled, Diabetes Eradication – Myth or Reality?

Delivered by Prof Patricia Kearney, of the department of epidemiology at the new School of Public Health in UCC, it created quite a stir. First an important point – she was referring to Type 2 diabetes mellitus, the form of the disease that is linked to obesity and the one that occurs when the body becomes less sensitive to the sugar-regulating hormone, insulin.

But with obesity levels in Irish people over the age of 50 running at 34 per cent and with the prevalence of diabetes having more than doubled between 1998 and 2015, even the vaguest possibility of eradicating the disease has enormous appeal.

In setting out her stall, Prof Kearney looked at different levels of prevention. Primary prevention, the process whereby Type 2 diabetes would be completely prevented, is not a pipe dream.

Researchers in UCC are currently working on one such primary prevention programme – Choosing Healthy Eating for Infant Health (CHErIsH). The Health Research Board funded study is using vaccination visits to interact with mothers, advising them of infant feeding habits aimed at reducing the likelihood of childhood obesity.

However, the largest primary intervention of all is the introduction of a sugar sweetened beverage (SSB) tax. Due to be implemented in Ireland later this year, a sugar tax is designed to combat the 18 per cent increase in diabetes associated with a high SSB intake. Kearney and her colleagues have worked out the impact of the sugar tax here and have concluded the public health measure has the potential to prevent over 2,300 cases of Type 2 diabetes over a 10-year period.

Screening for unrecognised diabetes is an example of the secondary prevention of the disease. Over 80 per cent of blindness in diabetes is caused by damage to the retina at the back of the eye. This complication is completely preventable and a national retina screening programme aims to identify undiagnosed cases of diabetes as well as reducing retinal disease.

Obesity surgery is a form of tertiary prevention, whereby you intervene to improve the quality of diabetes care. There is now evidence that metabolic surgery is more clinically effective in the treatment of severe obesity than any non-surgical intervention. UK research suggests a staggering 65 per cent diabetes remission rate for those with severe obesity who undergo some form of gastric bypass surgery.

And last week, some interesting research emerged from NUIGalway, showing that changes which influence the dietary environment – such as easy access to healthy meals – are about 56 per cent more effective than interventions which sought to persuade people to eat less unhealthily.  As co-author, consultant endocrinologist Prof Francis Finucane notes, “this is consistent with our understanding now that obesity and diabetes are complex neurobehavioral disorders which are strongly genetically determined and are highly susceptible to environmental factors”.

What about the holy grail of diabetes reversal? There is growing evidence to show that Type 2 diabetes can be put into long-term remission, without drugs.

British researchers have shown that  diabetes remission could be sustained for up to 10 years through weight loss. Others say patients should be officially reclassified as “non-diabetic” when they achieve remission (defined as a return to normal blood sugar levels for one year without drugs).

Did I ever think I’d see a time when people previously diagnosed with diabetes were in sustained remission?

Can we reverse Type 2 diabetes?