Deli counter: Where is someone looking to be healthier to start?

Is it possible to buy a reasonably healthy lunch from a convenience store? 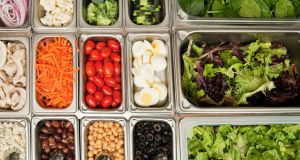 What to choose from the deli counter?

We’ve probably all been there at some time: Standing, mesmerised, in front of a convenience store deli counter, starving and about to make a bad decision. Healthy eating plans often go out the window when faced with a smorgasbord of choice.

“We might have very good intentions, but we are visually cued to eat, so when we come up to the deli counter, it’s quite easy to mind-swap and think, ‘oh, I’ll just have a little bit of coleslaw too’,” says Paula Mee, consultant dietician. “And of course, we’re not serving ourselves, and other people can be more generous with servings.

“The big issue is the size of the portion we’re offered. If we’re spending money on a lunch, we’re looking for the best value, but it’s not always the best nutritional value. We should be looking for quality instead of bulk.”

Mee and I are are staking out a suburban convenience store over a busy weekday lunchtime, observing what people are buying at the deli counter, and searching on the shelves for healthier alternatives.

There’s no doubt what the most popular order of the day is.

The €5 meal deal comprising hot chicken fillet in a bread roll, a packet of crisps and a fizzy drink, is what a sizeable majority of those in the constantly moving queue (much of it made up of teens from a nearby school), are having for lunch.

There is plain chicken available on the deli counter, wholegrain bread on the shelves, and fruit pots that could be substituted for the crisps, but they’re not included in the deal. Instead, almost every order has mayo or butter slathered on a white roll, some have ketchup too, and a fried, breaded chicken fillet inserted. The truly hardcore pack a couple of bacon rashers in too.

“Delis offering a roll, sugary drink and crisps for €5 are unlikely to be buying anything but the cheapest ingredients,” Mee says, as we watch the fried chicken – spicy, plain or southern-fried – fly out of the shop.

Processed meats, and that includes ham, corned beef and salami, as well as those chicken “fillets”, are not a good choice, according to Mee.

“Processed meat is any kind of red or white meat that has been salted, smoked, cured or taken through another process to enhance flavour or improve preservation . . . processed meats are generally high in salt and additives, flavourings and preservatives, such as nitrites.

“When nitrites combine with amines in meat they create nitrosamines. Some studies have found this to be carcinogenic. Only about 5 per cent of the nitrites we eat come from meat. We actually get most of them from plants and water. However, according to the World Heath organization, the consumption of processed meat is associated with small increases in the risk of cancer. And the more you eat, the greater the risk is.”

So, what should we be choosing instead?

“I’d be more inclined to choose something like egg or cheese as a protein – and there are lean cheeses that you can get – and bulk that up with plenty of vegetables. Having said that, there’s nothing wrong with the odd slice of turkey,” Mee says.

“The lower fat cheeses would be mozzarella and feta (if you don’t have high blood pressure. If you do, it wouldn’t be the best choice because some of them are quite salty). Camembert and brie would you believe are lower in fat and calories than cheddar, even though they’re creamy they actually contain less fat and calories per ounce as there’s more water in them.”

Ham need not be completely off the deli menu either. “If I was going to chose one ham it would be a Parma ham. That has a lot of visible fat, but you can remove it if you want. It’s usually hand cured, so while it is salty, there are no additives in it. It’s a very ‘clean’ label – pork and salt, they’re the two ingredients, while if you look at some of the cheaper cuts, the Billy Roll-type cheaper ham cuts, there’s a lot of preservatives and salt added.”

When it comes to a carbohydrate choice, wholegrain is best. “It has bran, which is the fibre, it has the endosperm, which has a lot of vitamins, and the germ, which is high in B and E vitamins.”

But what about avoiding the deli counter altogether?

Can a healthy, tasty lunch be pulled together from the convenience store shelves?

After a lot of label reading – and some items hastily returned to the shelf – the dietician’s lunch choices from the well-stocked shelves were organic chickpea falafel (“70 per cent chickpeas, very high in fibre and protein”), with rocket, red pepper and cucumber salad, and a spoonful of hummus.

Items that failed the label inspection test included garlic pâté – “four times the saturated fat of the falafel!”; hot smoked BBQ salmon – “what does BBQ mean here?”; and coleslaw – “only 47 per cent cabbage, finely shredded so highly processed, and 37 per cent mayo”.

So, it turns out that it is possible to buy a reasonably healthy lunch from a convenience store, using both the deli counter and the shop shelves.

But there was one Mee resolutely refused to consider.

It seems that there is just no excuse for a hot cheese and ham jambon or a breakfast roll except, perhaps, wicked indulgence.

Bread: Opt for wholegrain varieties. These have more nutrients and fibre to keep you feeling full. They also have more B vitamins to help release energy from food.

Vary the type of bread. Keep a selection of breads in the freezer and just remove and defrost what you need for that day. Supermarkets stock a wide range of breads nowadays which offer a tasty alternative to the white sliced pan.

Don’t restrict sandwiches to sliced bread. Try your favourite filling in any of the following for an exciting change: wholemeal pitta pockets, wraps or portable packs of Ryvita crackers.

Fillings: Add salad leaves and bulky, low-calorie vegetables to your sandwich. Skip the spread if possible and opt for hummus, olive tapenade or cottage cheese for something different.

Try a TLT (turkey, lettuce and tomato): Sliced turkey breast preferably off the bone, lettuce and cherry tomatoes, with some avocado slices. Pile into a whole-wheat pitta pocket or small wholegrain bap. If you’re trying to manage your weight, keep your carbohydrate servings small to lower calories and bulk up on veg instead.

Egg and rocket: Mash a couple of hard-boiled eggs with a little mayonnaise. Add finely chopped chives and rocket.

Apple and cheese slaw: Thinly slice/cube a Pink Lady apple, a stick of celery and mix with a couple of matchbox-sized pieces of brie. Stir in chopped spring onions and two teaspoons of natural yogurt.

AND IF YOU MUST HAVE A HOT CHICKEN ROLL

Instead of adding chopped up fried breaded chicken, fatty bacon and tomato ketchup to a white roll, try baked chicken tenders (coated in whole-wheat bread crumbs), iceberg lettuce, chopped red peppers and tomato relish in a seeded or wholewheat roll. You can half the calories and increase the fibre substantially.

Paula Mee is a consultant dietician and co-author, with Lorraine Maher, of Gut Feeling (published by Gill Books)