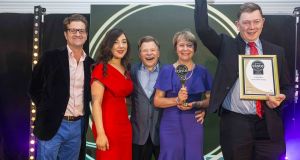 A black pudding maker from Meath has said he is “walking on air” after winning the top prize at the Great Taste awards in London on Monday night with a product that did not even exist this time last year.

Hugh Maguire’s smoked black pudding was found to be better than 12,366 other products which competed for the top honour of Great Taste Supreme Champion at the 22nd Golden Fork Awards, the climax of months of judging across Ireland and Britain.

“I don’t know where I am, to be honest with you. I just can’t believe it, I am walking on air,” he said on Tuesday morning. “This time last year this product wasn’t even incubated.”

The product he was referring to is a black pudding made from fresh pig’s blood and containing no artificial preservatives and smoked over beechwood chippings for 45-minutes.

Mr Maguire, started his butcher’s business in 1991 and took inspiration for his award winning product from travels around France and Spain. “I was always so amazed at how many smoked meats and sausages there were in those countries and while we in Ireland have very few,” he said.

He installed a smokehouse at his craft butcher shop upon his return.

With over 100 smoked products picking up Great Taste awards this year, the UK and Ireland has clearly found an appetite for playing with fire.

“This Smoked Black Pudding really does encapsulate what Great Taste is all about; a simple, rather humble product made using good honest ingredients, with a dash of innovation and well measured twist thrown in to excite the palate,” said John Farrand, managing director of the Guild of Fine Food.

“We have seen many smoked products achieve outstanding Great Taste results this year, aside from those going home with Golden Forks, which reflects a wider movement among producers who are embracing this nostalgic way of preserving and cooking to create truly exceptional food.”

The competition is judged by more than 400 food industry professionals, food writers and chefs, and every product is blind tasted at regional and national level.

O’Neill’s triumph continues a remarkable run of success for Irish food producers who have won the top prize for four of the last five years. Hannan Meats in Moira, Co Down, became the first company to win the Great Taste Awards supreme championship for a second time last year for a dry-aged beef product.