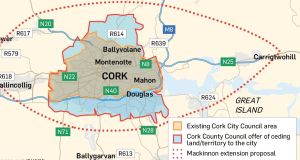 A graphic showing the different options and proposals for a land transfer to Cork City Council. Graphic: Irish Times Studio

Cork County Council is to submit a boundary extension plan to Cork City Council which will allow people across the city and county express their views on the proposal.

County councillors agreed on Monday to make the formal offer of territory under Section 29 of the Local Government Act which will involve a six month consultation process despite Cork City Council’s previous rejection of the offer when it was made without reference to legislation.

The offer comes amid escalating tensions between Cork City and Cork County Councils over a recommendation by an expert group chaired by former Chief Planner for Scotland, Jim Mackinnon which recommended a major expansion of the city into areas currently controlled by the county council.

The county council offer, first made last month, involved an extension to the city boundary to include areas such as Doughcloyne, Ardrostig, Frankfield, Donnybrook Grange, Castletreasure and Rochestown on the southside and Kilbarry, Carhoo, Kilcully and Ballyvolane on the northside.

All of these areas were included within the city boundary extension proposed in the Mackinnon Report on local government reform in Cork.

The formal expansion offered by the county council, came on the eve of a meeting on Tuesday of the Implementation Oversight Body set up to implement the Mackinnon Report published in June which recommended a much large expansion of Cork city out into the county.

The offer, first made on August 3rd, was roundly rejected by city councillors with Cork City Council chief executive, Ann Doherty telling members on August 14th the county council offer ran counter to “the principles and rationale” of Mackinnon.

“It has been made clear by the Oversight Group to both chief executives that it cannot accept alternative proposals that run contrary to the proposed broad boundary changes set out in the Report of the Expert Advisory Group (the Mackinnon Report)” said Ms Doherty.

“In my view, the county council proposal cannot be interpreted other than to run contrary to the proposed substantial boundary changes set out in the Recommendations of the Expert Boundary Group, as accepted by the Minister,” she added.

But yesterday, county councillors met Cork County Council chief executive Tim Lucey and decided to resubmit the offer under legislation, a move which obliges the city council to formally consider it.

Mayor of Cork County, Cllr Declan Hurley said councillors had expressed concern about the impact Mackinnon would have on the county council’s ability to provide services across the county as it would mean a loss in rate and local property tax revenue of around €40 million per year.

He said county councillors felt the lack of public consultation on the Mackinnon proposal was deplorable and “communities cannot understand how such a deeply flawed approach was taken given the seriousness and magnitude of the situation”.

Cllr Hurley also highlighted the annoyance in the County Council chamber at the lack of response from the Minister to queries from the council about the role and remit of the Implementation Oversight Group which will oversee the transfer,

Cllr Hurley said the County Council wanted to listen to the views of communities and resubmitting its offer was a way to make this happen.

He added the County Council was also seeking legal advice on its options “in the event the Minister proceeds to alter the boundary in line with the Mackinnon report.”

“We feel very strongly about this as a council. We have a duty to represent the interests of people from across all of County Cork, from Castletownbere to Youghal, from Charleville to Carrigaline, and all areas in between. Common sense must prevail.”