Good luck booking at Aimsir. It has six tables and only opens four nights a week 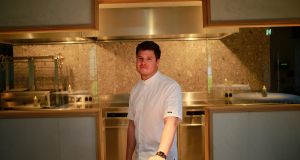 There’s something about Michelin. It gets under chefs’ skin like an inscrutable parent. They insist they don’t care about the accolade but then Daddy Michelin arrives with airport Toblerones in his briefcase and there’s a rush of longing and relief, dreams fulfilled, tears shed before bedtime.

“Thank f**k,” the Greenhouse’s Mickael Viljanen said on stage receiving his second star in London at the clunkier than ever awards ceremony on Monday evening.

The Greenhouse’s second star brings Dublin’s haul of two-star restaurants back to two for the first time in more than a decade since Kevin Thornton had his second star ripped painfully away. The Greenhouse has a refurbishment on the cards. It was a room makeover designed to land a second star. They can put away the swatches. The food has been more than enough for a long time.

In contrast Jordan Bailey and his wife Majken Bech-Bailey have had their doors open in Aimsir at the Cliff at Lyons in Kildare for roughly 20 weeks and they go home with two stars. That’s what happens when you sweat the idea of Ireland on a plate down to the last atom and turn beef tripe into something that looks like it belongs in a jewellery box on top of raw Killenure Dexter beef and smoked Lough Neagh eel. A waiting list awaits your attempts to book the €115 tasting menu. There are six tables in Aimsir and it only opens four nights a week.

Irish Twitter feeds flambé-ed themselves coybig-style starting with chef Enda McEvoy was the first onstage to receive a much deserved sustainability award for his Galway restaurant Loam. There was a touch of having your gateaux and eating it about Michelin boss Gwendal Poullennec’s praise for the “unprecedented international growth” of the guide in one breath and handing out Michelin’s first sustainability award in the other.

Why did he choose a sustainable ethos, McEvoy was asked? “It’s the only way to go because we’re all facing an imminent crisis,” he said, in one of the more articulate responses of the event, compared to the “eh, so, yeah,” from a glistening band of male chefs who looked as comfortable under their grilling as lightly boiled lobsters.

Michelin’s stellar scattering for Ireland was as much about business as it was about letting Irish cooking shine out from under the long shadow of London. It was hello new stars goodbye red book as the French tyre company announced that Michelin was going digital turning the glove box sized red books with their flimsy densely typed pages and red ribbon page marker into collectors items.

A coy photograph of an airplane window from Scottish chef Paul McDonald whose Kinsale restaurant Bastion took a star let that cat out of the bag earlier in the day. As a county, Cork now has a generous compliment of starred restaurants.

The Oak Room at Adare Manor in JP McManus’s €30 million hotel took a star along with an award for sommelier Jurica Gojevic.

In stark contrast to the billionaire’s hotel restaurant, Variety Jones brought a star to Dublin’s Thomas Street, where chef Keelan Higgs decision to cook on fire came in handy when he couldn’t get a gas connection for the first three months.  Belfast chef Gareth McCaughey had a big week with a review on Saturday and a star on Monday for his fine city restaurant The Muddlers Club. It brings Belfast’s haul of starred restaurants to three, a first for the city facing into the Brexit wind. The Muddlers Club was the darkhorse, the surprise winner and all the sweeter for it.

Has Mercedes thrown a spanner in its own works with the appealing new GLB?

Schoolflakes? The children not going to school . . . because they don’t like it