The Greenhouse: Still the best lunch in Dublin 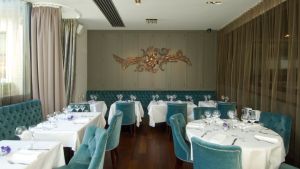 It’s not that Mickael Viljanen doesn’t have any jokes but there’s a seriousness about him all the same. You won’t see him on daytime TV anytime soon. Today he’s paler than a submariner on shore leave. I’m guessing his only vitamin D comes from snatches of sun on his break, metres away from his small intense kitchen in The Greenhouse on Dublin’s Dawson Street.

It’s just over six years since Viljanen arrived in Dublin from Gregan’s Castle in Co Clare to set the standard for cooking in the city. A Michelin star duly followed. When The Greenhouse opened, the restaurant world was in lust with Scandi hyper-locavorism. The French, who invented restaurants and gilded them with finesse and a sense of occasion, looked like fusty old relics. Bistronomie was on the march and acres of table cloths were warehoused. Poshness was reborn with a clutch of dandelion leaves and a glass of natural wine murky as cider.

Viljanen’s cooking was never local for local’s sake. His larder extends from the Atlantic coast of Ireland east to the next island and bits of France, with some added dates and spices. He’ll go to France to visit the small farmer rearing Limousin veal calves for the best sweetbreads. And while he’s there he’ll order some violon courgette (when you Google these, Viljanen seems to be the only non French-speaking chef talking about them). They’re like pale green gourds stretched into apostrophes. They have none of the watery quality of a courgette, just compressed southern sunshine photosynthesised into flavour. Viljanen turns one into an astonishing dish.

It’s lunchtime and the business-like room has an unbusinessy feel and a distinct absence of dead-eyed men in suits. The grind and dust of the Luas build outside has been replaced with gliding trams and sun glistening on handsome shopfronts across the way. A young woman and (I’m guessing) her mother are celebrating her graduation. It all lends an air of celebration to the dining room. The table linens are snow white but soft as brushed cotton duvet covers. An orchid in a glass takes the bare look off everything.

We’re going for the tasting menu and, just to see how a fashion-forward chef such as Viljanen does things, we ask for one of them to be vegetarian. Plant-based is still a dirty phrase in many kitchens. But one of my favourite dishes in the history of this column has been Viljanen’s take on celeriac so we’ll see if he can take one star turn and turn it into five.

Snacky things set the tone. There’s a seaweed cracker like sea foam turned to crunch without a trace of the oil that performed the magic. Dots of sorrel greener than spring leaves lend it tang. There are thin strips of sardines turned into silken ribbons (curing, conjuring, who knows?) on another crisp. And there’s a miniature asparagus tart so light the biscuit crisp pastry almost evaporates in the mouth.

Then there’s the only dish that’s here from six years ago. Like a favourite child it’s been tiger-parented into its best self, fois gras whipped into airy lightness topped with Granny Smith apple turned to gel, frozen foie, walnut and cubes of smoked eel. The veggie ying to this yang is a summery bowl of pasta parcels, the dough chewier than I expected but filled with salty sheepy pecorino, a smoked butter and finished with mint, lime and tiny broad beans barely bigger than peas peeled from their casings by a dextrous chef.

Then that courgette arrives, whole with its stalk still on. It’s been roasted in seaweed and finished with a maple seaweed flecked sauce and slashes of bergamot yoghurt. My mackerel tartare is a round of the loveliest fish topped with cucumber cut so tiny it’s almost digitised and a smudge of caviar. It’s excellent but the courgette is extraordinary.

Turbot comes with a whipped roe, like fish butter with briny pops in it. The veggie plate has white asparagus spears chunky as a baby’s arms with a raw egg yolk topped with black garlic and sprinkled with girolles, minerality meets creamy food hug.

Those sweetbreads come with wild garlic flowers and a date and coriander sauce with a top note of chili to tweak the sweetness of everything back from throat burning territory. Tang is the note of the veg dish with artichoke hearts, morels (the last of the season) and a buttermilk and lemon finish. Gnocchi roll-ups like spliffs of creamy potato tie it all down with a comforting earthbound softness.

A strawberry and yellow chartreuse cylinder with 40-year-old balsamic tastes (deliciously) like tinned strawberries and is topped with a square of meringue barely the thickness of a layer of gloss paint. There is a piped chocolate, hazelnut and wafers plate with a shred of gold leaf just to keep the decadence brigade happy.

Outside Ireland, cooking at this level starts at three figures a head. My dining companion, the Patrick Moore of starred meals, thinks the dial wavers here between two and three stars. Thanks to Viljanen’s restless energy The Greenhouse has long been the city’s best lunch. The great news is that it keeps getting better.

Lunch for two with sparkling water, coffee and two glasses of fino came to €197.50