‘It’s a very Irish thing, wanting to feel people are being well looked after’

Irish chef Patrick Powell on his new London restaurant, his granny’s soda bread and his love of Mayo 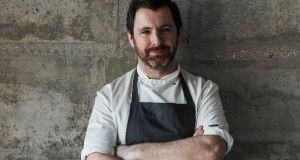 When the new London restaurant Allegra opened last week, on the seventh floor of The Stratford development in Stratford, the late grandmother of its Irish head chef, Patrick Powell, played a small but significant role.

“I’m using my grandmother’s recipe for soda bread on the menu,” says the Killala-born chef. “I still remember the smell of bread baking in the Stanley range in her kitchen, as if it was yesterday. It was where I first got a love for cooking.”

Powell describes his new restaurant as being in “the most exciting space in London,” the 42-storey development in Stratford, close to the Westfields Shopping Centre and former Olympic Park (now home ground of West Ham Football Club).

I want  people tp have a great experience, not just from the food but also from the hospitality

The location couldn’t be more different from his job for the last four years – head chef at the glamorous Chiltern Firehouse in Marylebone, where the customers include celebrities such as Hollywood A-lister Bradley Cooper and the Beckhams.

This time, the focus will be on hospitality rather than glamour, he says. “There will be nothing quite like it in London, in my opinion. The space is amazing. I want it to be a destination restaurant, where people will come and have a great experience, not just from the food but also from the hospitality.

“That’s important for me, and it’s a very Irish thing, wanting to feel people are being well looked after. I’d like people to come for lunch and stay on into the evening for cocktails, enjoy the gardens and then tell their friends about it next day.”

Allegra – named after the owner’s daughter – with its floor-to-ceiling windows, outdoor terraced garden, and soothing green and grey interior designed by Space Copenhagen, the team behind Noma, occupies the seventh floor of the skyscraper. Outside on the terrace, diners will be sheltered under a triple-height cedar cantilevered canopy, with an illuminated pergola. Inside is a cocktail bar, and a more formal dining ambiance with banquette and table seating.

Diners will be whisked up in a dedicated lift from the ground floor of the six-storey hotel underneath the restaurant. Overhead is a 34-storey apartment block, The Stratford Lofts, the “unique virtual community” of the development, with three communal “sky gardens”, aimed at the rental market.

The Stratford project is the brainchild of Harry Handelsman, the developer behind the £200 million renovation of the Grade I-listed St Pancras Renaissance Hotel in Kings Cross and the celebrity haunt Chiltern Firehouse, which is where Patrick Powell encountered him.

After four years as head chef there, Powell was ready for a new challenge. He was “blown away” when Handelsman offered him the job of running the fine-dining part of his ambitious new project. They both had a similar vision – a restaurant where hospitality would be the key attraction. For customers to leave the convenience of central London for a high-rise restaurant in Stratford, the experience provided has to be memorable.

Much of the produce will come from specially purchased farmland in Kent. Charcuterie is from in-house curing rooms at Allegra; the terrace garden will provide herbs for the kitchen, and an outdoor wood-burning grill will double up as a fireplace. Oysters come from Achill Island. The menu includes hand-dived scallops, with cucumber, pickled strawberry and elderflower, or suckling pig, turnip, Bramley apple and mint. There will also be sharing platters and small plates.

Powell started his culinary career as a teenager, washing up in the kitchens of a local hotel in Mayo. His “lightbulb” moment came when he read Marco Pierre White’s book White Heat (1990), a book credited with changing the image of chefs into sex symbols.

“I knew then, after I read that book, that this was what I wanted to do.”

He honed his skills at L’Ecrivain in Dublin before travelling abroad for experience. In Australia, he worked at Melbourne’s Cutler & Co, where he credits chef Andrew Mc Connell as an enduring inspiration, a chef dedicated to innovation.

Moving to London in 2011, he worked for celebrated chef Anthony Demetre at Wild Honey, before taking a temporary position at Chiltern Firehouse; in the end his tenure there lasted four years.

Powell retains his close links to Ireland, returning to Mayo several times a year to see his parents Lila and Freddie, and his three sisters Lisa, Tracey, and Marie. “I loved Myrtle and Darina Allen’s books, grew up on them, but I’ve never had a chance to visit Ballymaloe.”

And as for any thoughts of returning home one day to open up his own place? “It’s a nice idea, but I’ve a few years in London left in me yet.”

His hopes for the Allegra team “I hope they stay for a while and I hope that they learn from it and further themselves. One of my long-term goals is that when someone leaves Allegra and they go on to another job and someone sees on their job application that they worked here, they think, ‘Oh you worked at Allegra’ and they know this is a good chef, a good manager, a good waiter or barman or whatever. What’s the right word? It’s legacy, I guess.”

Irish chefs in London “There are not enough young Irish chefs working in London. A few of them go to Robin [Gill], but there’s not as many as I’d like to see. I’d welcome them. Irish people work hard and they have good attitudes.”

Staffing his kitchen “It’s desperately hard to find chefs now. It’s also about finding the right people, I’d rather go with less chefs than hire people that are not right.”

Working at Allegra I want all the staff to be excited and proud to come in here to work – things like having natural daylight in the kitchen, having all the high spec equipment, having the charcuterie room, having that grill outside, working with the farm, having the herb garden.

His style of cooking “I guess you could call it modern European, if you have to, but I struggle with these buzz words and concepts. I don’t like high-concept restaurants. I like hospitality, and I love when people are excited to go out for dinner.

Building a team “I want people to be excited to come into work each day because in hospitality you work long hours and the pay isn’t as good as it should be, so you have to provide more – it’s this whole thing of growing a family.” – In conversation with Marie-Claire Digby