Aimsir, Co Kildare: The restaurant that puts Ireland on a plate

Review: The Cliff at Lyons destination clearly has its sights on two Michelin stars 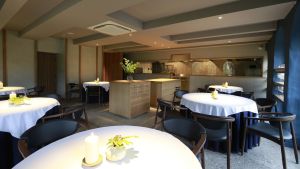 The rabbits on the Lyons Estate in Kildare take a simple approach to traffic. They lope away and then stop, stone still, as if this renders them invisible. I wonder if they take the same approach raiding the vegetable garden in front of Aimsir restaurant, where everything looks as if it’s cultivated by tweezer. Unless chef Jordan Bailey takes an extreme local approach to sourcing wild meat, this looks like a perfect place to be a bunny.

Aimsir has been a long time coming, a serious food project in which the English chef and his Danish wife, Majken Bech-Bailey, announced a plan to put Ireland on a plate. Right so.

The Cliff at Lyons looks like Tolkien’s shire styled by Cath Kidston, lots of stone cut low buildings amid manicured lawns and shrubs. It has set its sights on becoming home to a Michelin-starred restaurant. And the aim is two stars, rather than one, if the cut-glass precision of Every Last Detail is anything to go by.

The entrance to Aimsir is a new glass-fronted box clad in tarred timber as if it’s facing weathering waves rather than a slight breeze from the canal. Inside it’s Madmen meets Mad Food Camp, with a cocktail bar, and jaunty music on one side leading to a small silent dining room painted Dr Who Tardis navy.

The no-music atmosphere feels stark when you’re the second table to arrive. But by the end of the evening the room is buzzing.

An 18-course tasting menu sounds exhausting but lots are button-sized one-bite mouthfuls. Like the hollowed-out skin of a Violetta potato that looks like an animal dropping, with a white flower on top. This is probably deliberate. It was inspired by the couple’s first visit to an Irish farm, Ballymakenny potato farm. Inside the blackened crisped skin there’s fermented black garlic from Drummond House and Boyne Valley Bán goats cheese. It’s as crunchy and delicious as Tayto on a tasting menu.

There’s a tiny tart of Killenure Dexture beef in a casing made from its own tripe with a lacy Fabergé egg style lattice of tripe over the tiny pieces of raw beef mixed with smoked Lough Neagh eel. It’s an astonishing creation. Kelp gets pressed with blackcurrant juice to taste like a glass of Miwadi on a Connemara beach.

And then we go from snacks to small bowls. A Flaggy Shore oyster in a warm sliding liquor of roasted koji butter is warm and also cold, in a way that seems impossible. Two kinds of clam are chopped and topped with an elderflower that took a jeweller’s level of precision to tweezer into place, especially as they’re so freshly shelled these babies are still moving. There is more tweezer action here than in a brow bar. At one point there are so many white aproned chefs wielding them they look like medical students training for open heart surgery.

The soda bread grounds all this high wire cheffing with heart-felt deliciousness. It’s made with Ballymore grains milled on site, black treacle and Guinness and comes with Crawfords cream from Tipperary that has been whipped into a raw butter that’s saltier than a chip at the bottom of a bag – deliberately. I love everything, apart from one dish, that follows.

The hazelnut miso asparagus, again from Drummond House, with nettle sauce, makes me grin like a loon.

I’m torn between the Dublin Bay skate wing and the Achill Mountain mutton as my dish of the night. Soft thready skate is corrugated with three cornered leeks and served with a puddle of chicken skin butter sauce, which is exactly as delicious as it sounds. The lamb has been brined, cooked and then pressed so it’s fudgy and luscious as pork belly, with a shimmering clarified sheep yoghurt and wild garlic broth.

The duffer is the “bacon and cabbage” which is mussels with egg yolk, kombu dashi and cabbage. It tastes like bacon but the cabbage is reminiscent of stinky sculleries and overboiling crimes against brassicas. Maybe it’s a deliberate nod to the past.

Mike Thompson’s Young Buck cheese is served as a matchstick of the blue cheese, riper on one end and a younger buck the further down you go. There’s a rhubarb dessert with meringue scorched with a charcoal so that it looks like its topped with a lacy slice of truffle. The second dessert is a gorse flower ice-cream hiding chewy crunch shards of sugar-coated larch buds. It’s topped with pale brown hazelnut and honey crisps and pale green elm shoots.

I’ve run out of words to describe the juice pairings but they are better than the offering at Noma. I’ll remember a glass of beet and blackcurrant juice served with a scorched rosemary twig long after I’ve forgotten the rubbish that passes for the non-alcoholic option in almost every other restaurant in Ireland.

When I tell him where I was, my son tells me that aimsir is Irish for weather but it’s also the Irish for tense, as in past, present or future tense. This seems right for this food project. I look forward to seeing where it takes us.

Dinner for one with juice pairing and tea came to €149