Why did six Dublin restaurants lose out on Michelin awards?

There are several factors in play in awarding a Bib Gourmand: price, standards – and the possibility of a Michelin star 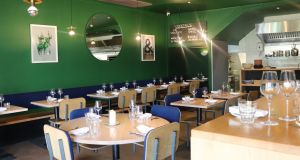 Bastible, on South Circular Road, Dublin, lost out on a Bib Gourmand – a Michelin star may be on its way

When the Michelin Bib Gourmands for 2020 were announced on Friday, nine Irish restaurants, six in Dublin, two in Northern Ireland, and one in Co Waterford, failed to retain their place on the list, which spotlights establishments that offer “good quality, good value cooking”, according to the UK-based guide.

Two of these, The Copper Hen in Co Waterford and Bar + Grill at James Street South in Belfast, have undergone structural changes in the past 12 months. In December, Eugene Long moved The Copper Hen from Fenor to Tramore, but did not make Michelin aware of the change, while the Belfast restaurant merged with James Street South restaurant last September to become James St.

The other Irish restaurants which previously had Bibs – named after Bibendum, the Michelin Man caricature – but were not included in the 2020 list, are Bastible, Delahunt, Etto, Pig’s Ear, Craft, and Forest & Marcy in Dublin, and Fontana in Holywood, Co Down.

These omissions, which include some of Dublin’s most successful and high-profile dining spots, raises several possibilities.

Is the price cap of €40 for three courses, which has traditionally been a requirement for consideration in the Bib Gourmand category, ruling some out of contention?

Have standards slipped at some establishments, in the opinion of the Michelin inspectors?

But perhaps, more intriguing is whether Michelin will bestow one-star status on some additional Dublin restaurants when the awards are announced in London on Monday.

Most speculation on the possibility of new stars being announced for Dublin centres on Bastible, on South Circular Road, Dublin, where Noma alumnus Cúán Green joined the kitchen in April and is now head chef, working alongside executive chef Barry Fitzgerald, who owns the restaurant with his partner Claremarie Thomas.

Irish Times restaurant critic Catherine Cleary, reviewing Bastible in July, said “there’s a new level of cooking in town” and described it as “the start of something truly bloody exciting”.

The three-course pre-theatre menu for €32 at Etto, Simon Barrett and Liz Matthews’s Italian-influenced darling of the critics, on Merrion Row in Dublin 2, is within the Bib guidelines, which must raise hopes of a possible elevation to one-star status. Etto’s former head chef Barry Sun Jian moved on in recent weeks, and will open Volpe Nera in Blackrock, Co Dublin. Vish Sumputh (ex- Luna and Chapter One) is now in charge of the Etto kitchen.

There has also been a change of chef at Forest & Marcy, with Ciaran Sweeney moving on. However Sweeney’s departure is recent, last month, so may not have been a factor in the Michelin inspection team’s assessment.

All of the Irish restaurants dropped from the 2020 Bib list appear to be eligible under the previously enforced €40 maximum for three-courses, but in some cases only at lunch, and only on certain days of the week. It is not immediately apparent from the guide's latest news update whether the keenly-priced three-course menu must be available for dinner, or indeed whether this stipulation still applies at all.

“Bib Gourmands are not just about value for money – the pricing must go hand in hand with quality cooking. In uncertain times, our readers are looking for ways to spend their money wisely and Bib Gourmands promise a good meal at a great price,” says Gwendal Poullennec, international director of the Michelin Guides.

However Rebecca Burr, director of the Great Britain and Ireland Guide, hints at a possible relaxing of the three-course rule, in line with changing eating patterns. “While there is no set formula for a Bib, we have seen a trend for great value sharing plates this year. While many diners still like to celebrate occasions with a traditional three-course meal, less structures menus are now also on the rise,” she says.

There are 22 new Bib Gourmands, five of them from the island of Ireland, in the 2020 Michelin Guide, to be published next week, bringing the total to 132 across Britain and Ireland, 27 of them in Ireland.