Dublin restaurant Chameleon to close after 25 years in business

VAT increase and staff shortages behind decision, and owner warns of more to come 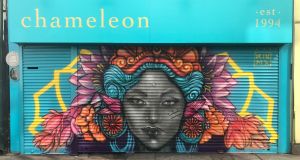 Chameleon, an Asian food restaurant in Temple Bar in Dublin 2, will close this weekend

“I’m slightly overwhelmed, but not surprised – there has always been a lot of love out there for the Chameleon.”

When the chef Kevin O’Toole and his wife and business partner, Carol Walsh, announced on social media on Monday night that their restaurant, in Temple Bar in Dublin, was to close after 25 years, the reaction was swift and heartfelt, with customers and fellow restaurateurs posting hundreds of messages of support.

“We have customers who were here for their 18th [birthday] and back for their 40th. We’ve had private emails from people and they’re gutted. We had people on the phone last night and they were crying. It’s unbelievable,” O’Toole says.

The VAT increase is crippling for a small restaurant. Every time the VAT bill comes around it’s, ‘How are we going to pay this?’ I haven’t paid myself in two months

Last month the restaurant was a finalist in the readers’ choice category at the Food & Wine Magazine annual awards.

O’Toole says the closure is down to the recent VAT increase, and skills shortages in the industry, as well as escalating operating costs, including a 100 per cent increase in their insurance premium this year.

“The VAT increase is crippling for a small restaurant. Every time the VAT bill comes around it’s, ‘How are we going to pay this?’ I haven’t paid myself in two months.”

Staffing has been an ongoing issue at the restaurant, which started out serving Indonesian food but in recent years expanded its menu to cover a range of Asian cuisines. “It’s not just chefs; it’s really hard to get good front-of-house people too.”

The photo says it all. Beautiful couple & partnership, stunning friends. Legends to us all. Loved by your team, present & past (past members we were too!!). Let’s get old & grey together! Love you both 💔❤️💔 @ChameleonFood @chameleonrestau https://t.co/mIHaFz3qGK

The very first time I ever went out for a nice dinner with friends (all previous meals out being basically sandwiches or all day breakfasts in grubby cafes) was to Chameleon. This is sad news. https://t.co/0f8A27BXo1

The business employed 15 people, and O’Toole has secured alternative employment for them all. “I’ve been on the phone the past two days, talking to everyone I know in the industry, to get them good jobs in nice places with good people that will treat them well.”

He believes that more restaurants will close, with small independents particularly hard hit. “I can see us losing another one every time the VAT bill comes around, and that just means more job losses.”

“We are a 50-seater restaurant, and if you’re a 50-seater you need to be full all the time, and when you’re up against new places that are opening up that can take 150-200 people on a Saturday night, it’s tough. Whether they’re good or not, people will try out the new places, and that’s when the small ones go.”

Over the past year the couple have “thrown everything at the business”, with a revamp of the restaurant frontage and the introduction of menu specials, including a three-plates-for-€25 offer in August.

“Standards didn’t drop,” says O’Toole, who insisted on using top-quality ingredients, including Irish free-range chicken. “I didn’t want to go down the battery [chicken] route, and start using substandard ingredients. I wouldn’t be able to stand behind it, and I’m proud of this.”

Chameleon has been operating from Lower Fownes Street for a quarter of a century, but Walsh, who worked front of house and then in administration, has held the lease on the building for 30 years, formerly operating a dance and aerobics studio from the upper floors.

“She had a little apartment on the top floor, which is now a prep kitchen, and on the ground floor she opened a cafe called the Cellary to serve healthy food to her customers pre- and postworkout,” O’Toole says.

After six months travelling in Indonesia, Walsh came home and opened Chameleon 25 years ago, and was joined in the business by her now husband 18 years ago. “I was working in restaurants, and she suggested joining forces, but I didn’t want to work with the person I was in love with. Then, when Carol was expecting our first child, who is now 18, it made sense.”

The couple have no plans for another restaurant. “I will be lecturing in Crumlin College, teaching the chef apprentices, and I’m really looking forward to it,” says O’Toole, who recently completed a master’s degree in culinary nutrition.

But for the rest of this week, from Wednesday to Saturday, O’Toole will be back in the kitchen at 1 Lower Fownes Street. “The reason we went public on social media about our imminent closure is because we really want to go out on a high, not a whimper. We still have a few tables for Wednesday and Thursday, and we would love people to come in to us...

“It’s been a great ride,” O’Toole says. “There’s been loads of love. It’s been really touching.”

You can book by telephoning 01-6710362 or by emailing book@chameleonrestaurant.com