I’m part of a #HometoVoteNo campaign, organised by London Irish United for Life 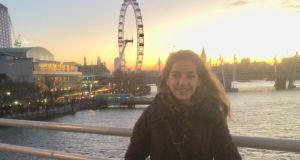 Suzanne Conway: ‘As an Irishwoman in the UK, I am proud of Ireland’s longstanding culture of life and the unique emphasis placed on the family.’

When I moved to London in 2016 I never imagined I’d be involved in a referendum back home in Ireland. My normal pattern of life in London got interrupted when earlier this year the possibility of a referendum on the Eighth Amendment became more and more likely. Now I find myself not only booked to go home to vote, but part of a group encouraging and informing other members of the Irish diaspora about the importance of making that same journey.

In January this year I joined London Irish United for Life, a group set up by Irish emigrants to support efforts to save the Eighth and to encourage eligible voters who are based here in the UK to go home to vote No.

Emigrant voting rights are pretty restrictive. For example, only those who have been abroad for 18 months or less and who intend to return to Ireland are eligible to vote. There are a number of people in our group who will be travelling home to vote No, and indeed some who are unable or ineligible and are simply encouraging those who can.

The #HometoVoteNo campaign that we are running has involved raising awareness in a variety of ways with Irish people who are living here for 18 months or less. We have travelled to GAA grounds throughout London, distributing leaflets and speaking to people about the possibility of returning home to vote. We have found many areas of London with local GAA clubs where there is also a sizeable Irish community, and have been largely met with positivity and interest in the campaign to travel home.

At the recent London vs Sligo Connacht SFC match at McGovern Park in Ruislip, we distributed information on the referendum, spoke to scores of people who were attending the match, and reached a large and varied age-group - many of whom were already well-informed on the issue.

While our group is specifically London-focused and not international, we have been contacted by other Irish pro-life groups based elsewhere, who have shared their stories, and encouraged us on our social media platforms.

We’ve put posters up in Irish pubs throughout London, made videos for social media, spoke at the recent ‘March for Life UK’ event, and walked in the London St Patrick’s Day parade on a bitterly cold March afternoon. Our most recent work has been with the Alliance of Pro-Life Students, who have helped us to reach the Irish student population in the UK. It has been heartening to see students from Oxford to Belfast, displaying our “Don’t Repeal the Right to Life from the Irish Constitution” posters in support of the Home to Vote No message.

It’s worth mentioning that Irish students in UK universities may apply for travel bursaries to go home to vote. They are welcome to get in touch with us and with the Alliance of Pro-Life Students should they need more information on this.

Our Home to Vote No campaign has been greatly enabled through social media and print media articles, and while most of our members have come on board through word-of-mouth, there are people who noticed our Facebook page, Twitter posts or letters to Irish papers in the UK and got in touch.

We’ve had people contact us on behalf of their elderly Irish mother or father, living in London for much of their lives, who read a piece about us, or a Home to Vote ad from us in those Irish community papers, and were eager to know if they were eligible to vote in the referendum.

Our most popular “Home to Vote” posters and ads read “Will you go Home to Vote No on May 25th?” alongside images of the “Cherishing all of the children of the nation equally” line from the Irish Proclamation of Independence, and quotations from Padraic Pearse. They have resonated with Irish people here who feel strongly connected to “home” and to our proud history in defence of human dignity and rights.

As an Irishwoman in the UK, I am proud of Ireland’s longstanding culture of life and the unique emphasis placed on the family. Perhaps the patriotic nature of those images strikes a cord with the Irish abroad like me, who have an emotional connection to Ireland and its politics no matter how far away we are.

Suzanne Conway is a member of the London Irish United for Life group. See hometovote.uk

‘I’m lonely during lockdown and looking for casual sex. How do I do that safely?’
Real news has value SUBSCRIBE