I now relate to her as a mother, a lover, a woman in the world overwhelmed by heartbreaking beauty 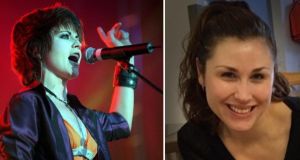 Molly Murphy (right): 'I revisited 'No Need to Argue' over 20 years later and experienced it as a wholly different album.'

It’s said that the Irish sing loud when happy and louder still when sad. I like to imagine that the whole range of Irish melancholy was sung out in my great-grandfather’s bar behind Chicago’s stockyards. His surname was Murphy, which means “sea warrior”, but crossing the Atlantic was the least of the battles he fought by the time he left Co Mayo during the Great Famine. During that time, up to one-quarter of Ireland’s population vanished - either dead or exiled. One can only imagine how loudly he was compelled to sing.

Growing up in the southwestern United States, I celebrated my Irish heritage in the same manner as most Irish-Americans: Claddagh rings, St Patrick’s Day parades and Notre Dame sweatshirts. But in 1994, that began to change. My father bought me The Cranberries’ No Need to Argue, and I heard Dolores O’Riordan’s voice for the first time. It was a sound at once otherworldly and familiar; it touched the very root of my soul. I spent hours on my bedroom floor reading the album’s cramped liner notes. ‘Yeats’ Grave’ led me to an anthology of Irish poetry; I shivered through an Arizona summer spent in the damp fields it conjured for me.

Dolores O’Riordan sometimes performed in the Sean-nós style of singing. You know this sound; it raises your hair like the electricity of a gathering storm. Frederick Douglass, a man with a perspective on misery that no modern person could comprehend, described his reaction to such singing thus: “I have never heard any songs like those anywhere since I left slavery, except when in Ireland. There I heard the same wailing notes, and was much affected by them. It was during the Famine of 1845-46... nowhere outside of dear old Ireland, in the days of want and famine, have I heard sounds so mournful.”

Even in the face of their decimation as a people, the unlettered, impoverished victims of Ireland’s Great Hunger sang. Though they had been betrayed by their infallible parents - by nature, God, and the government - they found it within themselves to create song upon song, and then they went out and sang them.

Around the time of her death, I read articles that told how Dolores O’Riordan had battled anorexia, bipolar disorder, chronic back pain, and chemical dependency. In spite of this, she created five albums with The Cranberrries, two solo albums, countless collaborations, and all the while gave voice to those around her who were impoverished, victimised, and ravaged by war. Dolores O’Riordan, in her darkest hours, created hundreds of songs and went out and sang them.

it seems that to be Irish is to cast a lifeline out to others with your art, even when you yourself are struggling

In the past year, I have come to a moment of reckoning in my life. Five weeks after I gave birth to my first child, I lost my eldest sister to cancer. My father was gravely ill. I faced a crisis of career. I didn’t know what to do with the thoughts and feelings that seemed too enormous for my body to contain.

I revisited No Need to Argue over 20 years later and experienced it as a wholly different album. Rather than seeing Dolores O’Riordan as a native guide to the motherland, I now related to her as a mother, a lover, a woman in the world overwhelmed by the heartbreaking beauty she sees everywhere she turns. I began to write again. I painted. I sang my daughter every song I ever knew, and sang very loudly.

Through my creative endeavours, I am a better and more present mom. Creativity was my sister’s lifeblood, and undertaking artistic projects has drawn me closer to her than I was able to be in the years leading up to her death. My father and I are forever bonded over music, and writing has enriched my career beyond what I could have imagined.

In the end, Dolores O’Riordan taught me what it truly means to be Irish: to create in the face of everything beautiful and horrifying that life has to offer, and in doing so, to practice that alchemy that spins sorrow into solidarity, and creates perseverance from oppression. To me, it seems that to be Irish is to cast a lifeline out to others with your art, even when you yourself are struggling, and may not be able to save yourself.