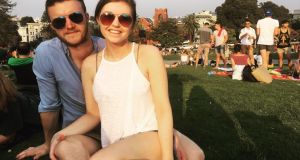 Marc Cowan and Brienna in California

My mother doesn’t like making a fuss so she and my father went to bed before I left. My brother was 10 at the time, and he didn’t know  I was leaving.

He has autism, and my mother knows how to deal with him well. She knew to tell him gradually, to first say I was gone for a few weeks, and then say it was for a few months. He was attached to me at that time. “Marc loves Brienna,” my mam said to him, “and she loves him too. When people love each other they go and live in the same place”.

Brienna comes from Sacramento, California. I met her in Dublin where we worked in the offices beside Leinster House. There were riots happening in the university that she went to in the US and I quizzed her about it. We politely argued for a while. She was very proud of her university and told me that the rioters were not students. We went to lunch and in the elevator she told me that the walls were mirrored for people with claustrophobia. I found that fascinating.

I tried not to make a fuss when she left, but airport departure lounges are arranged in a way that encourages as much fuss as possible

We spent all the time we could with each other for the three months she had left in Ireland. She went home to California and I couldn’t go with her right away. I tried not to make a fuss when she left, but airport departure lounges are arranged in a way that encourages as much fuss as possible, so it couldn’t be avoided .

That summer I flew to Los Angeles. I sat next to a man from Offaly who had lived in Iowa since he was a boy. He pulled up his shirt to show me that he was wearing bandages. “Only time I drink is when I come home,” he said, before telling me  he had fallen into a canal lock. He had broken ribs, and I asked him if the doctor said it was safe to fly. He frowned at me and said he hadn’t been to a doctor.

I was nervous about going through US customs. I thought they would tell me I had made a mistake filling out some form, and I would have to go back. It took me a few minutes to get through, and all of the fuss I had made was for nothing.

Once I connected to the internet, I received messages from people back home wishing me luck. I was delirious and relieved. At the airport, I stood out front and saw Brienna driving, watchful and leaning into the steering wheel, trying to find somewhere to pull over. We kissed and everyone beeped at us as though we were not the only two people in the world.

We stayed there in Los Angeles, and then we moved to Riverside with her parents. We moved up to Berkeley in August, covertly stayed in a sub-let with many rooms, and became very still and quiet when the landlord visited. We stayed in San Francisco, in a beautiful home that my mother’s friend moved to 30 years ago. We moved to a suburb of Elk Grove, where some of Brienna’s family live, and then finally we moved to Sacramento, to our own place. We don’t have to move anywhere else now for a long time.

Throughout all of this, I would video call my family at noon, knowing they would be sitting together in front of a fire, even if the weather was warm. My brother didn’t like speaking over the phone. He reacted to me leaving by becoming upset with the idea of California. He would become annoyed when my parents spoke of it, or he saw it in a film. My mother told me this was his way of processing it. She believed he disliked California because it had taken me, and that I stayed there because I preferred it to Ireland.

He didn’t like California at all after that, but in December he came here with my parents and my sister. He saw that the sky was overcast and the trees were bare like in Ireland, and he was glad to know that both places didn’t really look all that different, and it could not have been anything in the landscape or the weather that drew me to it.

He speaks to me on the phone now and laughs at my pixelated face when I smile at him. He asks me about Brienna, and when we’re coming home. Soon, I tell him, and he tells me that’s fine, provided we don’t make a fuss.