The Irishwoman teaching juggling to women in Gaza

‘I doubt many people use their holidays to go to Gaza' 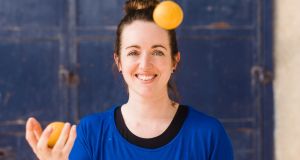 Jenny Higgins: ‘Circus has given me so much confidence, and opportunities to meet and interact with people all over the world.’ Photograph: Nathalie Marquez Courtney

Two years ago, I embarked on a journey to combine both my hobby and my work, which might not seem that unusual, except that my job is working on human rights, and my hobby is circus.

While studying I started on my circus journey, primarily as a way to make friends in a new city. Not only has it been a great way to get fit, but it has given me so much confidence, and opportunities to meet and interact with people all over the world. My life is enriched because of it.

I have also been working in international development for the past five years, and am fortunate to have worked for some excellent Irish NGOs on human rights in developing countries.

An obvious connection between these two parts of my life was never something I had considered, until I started working in Gaza, the 42km long strip bordering Israel and Egypt that forms part of the occupied Palestinian territory. Gaza has been governed by Hamas since 2007, and in that time Israel has imposed an unprecedented blockade for goods and people on all border crossings in and out of Gaza, which has created a serious and deepening humanitarian crisis, worsened by three wars in six years. The United Nations has warned that by 2020 Gaza will be uninhabitable.

It was through my local translator, Mohammed, that I was introduced to the small circus community in Gaza. He had been working with a group of Italian circus trainers, and this prompted me to think about attempting to do something similar myself. I worked with my Irish circus school, Taking Flight, and was successful in getting Culture Ireland funding to work and perform with the school in Gaza in October 2016. The story of that amazing experience was covered in the Irish Times Magazine.

Working with the Gaza Circus School was extremely rewarding, as the circus provided these young men with a place to escape from the harsh realities of living under the blockade. There is a history of the arts being used for social change. For those who have experienced conflict or trauma, the circus can be a form of escape, a place to share experiences and express emotions. It serves as a support network that meets both physical and psychological needs.

This experience encouraged me to try something even more ambitious. The circus community in Gaza is male-dominated, and I wanted, as a female circus trainer, to try to engage with women.

But I completely underestimated how hard it would be to encourage women to try something so new in such a short amount of time - after all it can be hard enough convincing someone in Ireland to trust me and go upside down on a trapeze.

I managed to get two women to try aerial acrobatics with me. After the session, they told me how they wished they could have a place for women to engage with circus skills, as there is a near total absence of access to recreational and sporting activities for women and girls in Gaza. I made a promise to come back and do just that.

I knew I had a unique opportunity to do something special. My work had given me an understanding of working on development projects with women in Gaza, and I found some kindred spirits in the NGO and circus community who supported me to turn this seemingly unrealistic dream into a reality this year.

After one year of planning, months of proposal writing, Skype calling, editing, budgeting and a general feeling that I might be losing my mind, we opened the Gaza Women and Girls Yoga and Circus Hub in February.

Due to the blockade, it is impossible to get circus equipment into Gaza, and I and a colleague had to carry the entire contents of a circus school on our backs across the checkpoints into Gaza. The bags we carried were stuffed with juggling balls, clown noses, silks and a trapeze. Entering Gaza is a surreal experience, inaccessible to most, with only a handful of journalists, diplomats and humanitarian workers able to enter and exit. You must pass through a 1 km tunnel, and with walls and watch towers spread out behind, you swiftly realise how locked in Gaza and its inhabitants are.

orking with an Italian NGO, CISS, and a local women’s organisation, Aisha, the Hub will work with local women to offer classes in yoga and circus, for women and girls of all ages. The aim is not only to provide psychosocial support, but also to empower the women who participate, by gaining new skills, strength, self-confidence and some financial income.

The Hub will be a place run by Palestinian women for Palestinian women, providing a safe environment where women can come together, exercise, relax, be physically expressive, and most importantly, have fun.

The trust, determination and enthusiasm of these women have made all the stress, planning and checkpoints worthwhile.

One of the women told me: “In the classes, I am doing these exercises for the first time, and when I do them I feel like I am de-stressing, I feel relaxed, and when I go home I teach every movement to my nieces and nephews. We Gazans, regardless of age or gender, need these kinds of exercises, they have an amazing effect of boosting your mood and psychological state.”

I doubt many people use their holidays to go to Gaza, but for me, I can’t imagine using them to go anywhere else.

If the bank valuation drops on a house we want to buy, will the seller negotiate on price?
4

My biggest lockdown mistake? Relying on TikTok as a co-parent
5