Welcome to My Place . . . Chongqing, China

Caitlin Neachtain, from Connemara, loves the noise, newness and neon of Chongqing 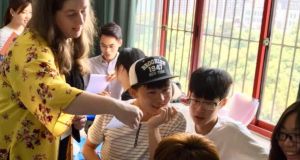 Caitlin Neachtain is working on a PhD in applied linguistics at Mary Immaculate College, Limerick and is currently a visiting researcher at Sichuan International Studies University in China.

Moving to Chongqing, China’s fastest-growing metropolis, from the Connemara Gaeltacht has been a study in contrasts: “The noise, the neon and the sheer newness of Chongqing is astonishing, but this most Chinese of cities is better defined by its warm, welcoming people.”

Where is the first place you bring people to when they visit Chongqing?

Downtown Chongqing, at the confluence of the Yangtze and Jialing rivers, is known throughout China for its spectacular neon-lit skyline. Jiefangbei, the People’s Liberation Monument, lies at the heart of Chongqing, and is surrounded by luxury brand stores and commercial skyscrapers in an upmarket retail centre, where fashionable locals toting designer handbags mix with migrant workers carrying heavy loads on a bamboo pole loaded across their shoulders.

However, despite being one of the most densely populated areas in the world, a short stroll from the busy centre will provide a return to tranquillity at the 1,000-year old Buddhist Luohan Temple. Nearby, Huguang Guild Hall, with its traditional courtyards, shrines, theatrical spaces and tea houses will transport you back in time. Another five minutes on foot will bring you to Hongyadong, an old-style stilted complex sitting on a cliff face above the Jialing river, with stalls and craft shops. You are also certain to come across local chefs preparing sauces in large vats at the side of the street, or rolling ropes of fresh noodles before cooking.

The top three things to do there, that don’t cost (much) money, are:

Chongqing subway is convenient and cheap, and many of the visitor attractions in Chongqing are free, including Chongqing Zoo, where you will find the resident pandas at their most playful right after breakfast.

Eling Park is the highest point in the city, and the tower at the centre of the park is accessible for a token fee, well worth it for the panoramic views it offers from above the city.

Where do you recommend for a great meal that gives a sense of Chongqing?

Sichuan province is famed for its fiery cuisine. Hotpot in Chongqing is flavoured with both numbing síocháin pepper and pungent chilies, and while lean meats are available in some restaurants, authentic hotpot generally consists of pieces of offal with seasonal vegetables, and it’s delicious with a bottle of low-alcohol local beer.

Eating out is the norm in China, giving families and friends a chance to catch up. A selection of dishes are shared by the group, so you will quickly become familiar with various local delicacies. Pork features prominently in Sichuan cooking, and twice-cooked pork (hui guo rou) is popular. Gongpao chicken with roasted peanuts (gong pao jiding) also originates in the region. Grandmother’s tofu, a dish of spicy tofu and minced beef, and dry-fried chilli chicken are also recommended.

Dinner for eight people will cost as little as €25 in smaller restaurants, including drinks.

Where is the best place to get a sense of Chongqing’s place in history?

During Spring Festival and public holidays, visitors from all over China make a pilgrimage to the Martyr’s Cemetery and the prisoner-of-war camp at Mount Gele in Shapingba district.

What should visitors save room for in their suitcase after a visit to Chongqing?

Stock up on local tea and spices. Silk, jade and pottery can be expensive, but look out for bargains. Bamboo wood carvings, tiny handpainted snuff bottles, and calligraphy scrolls make unique gifts and needn’t cost the earth.

The death of the bra: Will lockdown’s great lingerie liberation last?
Real news has value SUBSCRIBE