When age caught up with my parents, I was 5,000km away 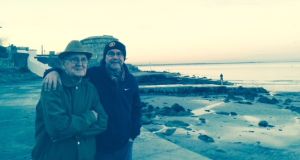 Martin McGovern walking in Seapoint in Dublin with his father Louis in 2016.

When age and ill health caught up with my parents, life-long residents of Dún Laoghaire, in 2004, I was in Massachusetts where I have lived since 1979. My mother had her first stroke and my father severely injured his back trying to help her. They spent months recuperating in hospital and, when they finally returned home, their lives were more circumscribed than before.

To their credit, they refused to give in and, despite new limitations, found ways to live life fully. They did, however, need more care, and especially so after my mother’s second stroke in 2013.

The prime responsibility of caring fell on my brother and sister-in-law and their family. Living locally, they took the lead in providing it for my parents. Nevertheless, within a home-and-away partnership, there was a smaller role for me.

Once my parents settled into a new routine, I started going over three or four times a year, often for a four-day weekend but sometimes for more extended stays when my brother and sister-in-law took a well-deserved break or holiday.

In Massachusetts, I had and still have a compassionate, flexible employer as well as a supportive wife and American family who encouraged me to go back as often as I could.

Before their health declined, return trips were indulgent personal vacations. When things changed, keeping a watchful eye on them meant operating at a much slower, careful pace and going where I never ventured before.

Having emigrated, to spend time with my parents as they neared the end of life was a remarkable gift

The list is long - hospitals and nursing homes, the chemist, grocery shopping, the bookies when my father wanted to place a bet or the ladies’ section of a department store when my mother wanted to browse the latest fashions. Going out also required more precise planning… were there parking options close by, accessible toilet facilities, too many stairs?

Bottom line was, despite the inevitable frustrations that come with elder care, I was part of the process of caring for my parents. Having emigrated and then to have such an opportunity over more than a decade to spend time with them as they neared the end of life was a remarkable gift, as was the patience and thoughtfulness of my brother and sister-in-law, who always kept me in the loop.

My parents are gone now but the memories from that period are indelible and the time spent with them a source of deep satisfaction. Although, when my mother scolded me one morning in my late-50s for having "no arse in my trousers" and a “silly” baseball cap, my mood was less satisfaction and more snit. Now, I just love her cheekiness.

After my mother died in 2013, my father was alone and lost without her

When I went to America first, I lacked the life skills or emotional maturity for dealing successfully with dislocation and adaptation. Anxiety over visa approvals and renewals taxed me, and the inability to be home for weddings, anniversaries and funerals often left me empty.

It took a long time to grow in confidence and comfort as an immigrant and ultimately as a naturalised American citizen. To be able to collaborate with my brother and sister-in-law in support of my parents from across the miles is more than I could have asked for back in that first awkward and, at times, sad decade in America.

After my mother died in 2013, my father was alone and lost without her and, when I visited, he could be a handful. By the hour, he drove me nuts and by the time I boarded the plane back to Boston, I was inevitably exhausted and happy to be heading west.

The September before he died, however, I spent nine splendid, sunny days with him. Despite the antics that went into getting ready to head out and make something of the day, we rallied to make that effort every time. The little things really do stick with you.

A Dún Laoghaire man to his core, he loved the seafront and during that hot spell, we did one of two things: have a late afternoon beer on the balcony of the Forty-Foot pub looking out over the town’s harbour, or stop for an early-afternoon ice cream, which had to be from Teddy’s.

On one occasion, as we lapped up the sun and lingered over our cones, we just sat together in silence, staring out at a shimmering Howth in the distance.

When we finally got back in the car, he went, “That was marvellous.” And, he was more right than he could have imagined.