Extraordinary Emigrants: Ann became a symbol of the wrongs perpetrated against the dispossessed 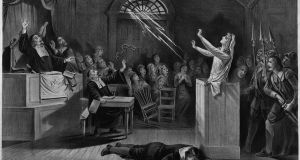 Even the smallest lives can create ripples in history. On the face of it, Ann Glover’s life would appear to be relatively insignificant, the date and place of her birth unrecorded, the exact circumstances of her leaving Ireland unknown. However, the consequences of her tragedy are more wide-reaching than she could ever have expected.

Goodwife “Goody” Ann Glover was a woman with a talent for being in the wrong place at the wrong time. Transported to a sugar plantation in Barbados in the wake of the Cromwellian conquest of Ireland, she became displaced for the first time. Her husband would die on the plantation, supposedly executed for failing to renounce his Catholic faith. It is said that before his death, he confessed his wife was a witch.

Around 1680 Ann moved to Boston with her daughter Mary, displaced for a second time, but this time to a location of her choosing where she could eke out a living. She became part of the the Massachusetts colony, was known locally as Goody Glover, and worked as a washerwoman.

Ann’s final troubles began when the children of her patrons, the Goodwins, accused her of stealing laundry. An argument ensued, and afterwards, the Goodwin children began to exhibit strange symptoms:

“They would bark at one another like dogs, and again purr like so many cats. They would sometimes complain, that they were in a red-hot oven, sweating and panting at the same time…They would fly like geese; and be carried with an incredible swiftness thro the air, having just their toes now and then upon the ground, and their arms waved like the wings of a bird.”

The strange case drew the attention of one Cotton Mather, a Puritan minister who to that point had not quite lived up to the reputation of his celebrated father Increase, the president of Harvard College. Cotton had a theory about the active nature of Satan’s presence on earth, and his conclusion was that the Massachusetts colony had been abandoned by God.

The case of Ann Glover seemed to prove his point, and he recorded his role as her chief accuser in his book Memorable Providences, Relating to Witchcrafts and Possessions.

Ann, he wrote, was “a scandalous old Irishwoman, very poor, a Roman Catholic and obstinate in idolatry”. For Mather, there was no contradiction in the idea of Ann being both a Catholic and a witch. Exacerbating her crimes of poverty and religion, Ann seemed to possess very little English. During her trial, when asked to recite the Lord’s Prayer, she could do so only in Irish, or in broken Latin. This was further confirmation of her guilt.

Ann was also found to have a collection of small dolls or poppets to which she admitted praying - most likely these were crude representations of the saints. Mather imagined Ann’s dalliances with Satan, claiming later in Memorable Providences that “She used to be at meetings which her Prince and Four more were present at. As for those Four, she told who they were and for her Prince, her account plainly was, that he was the Devil” - all this while incarcerated during her trial.

Ann was examined by six physicians, five of whom found her to be of sound mind. The possibility of Ann’s insanity was the last obstacle to her being sentenced to death, and now it had been removed. Certainly, Ann had the presence of mind to respond pithily to Mather’s offer of prayers: “If prayer would do her any good, she could pray for her self.”

Ann was hanged on November 16th, 1688. Although she was the last person hanged for witchcraft in Boston, her story marks the beginning of a tragedy, rather than an ending. Mather and his book would become hugely influential in the macabre events which would unfold in Salem in 1692.

Ann Glover, a woman of low standing in the community who had travelled from an unimaginably different community halfway across the globe, stands as a powerful symbol of the wrongs that can easily be perpetrated against the dispossessed. She fitted Mather’s idea of a witch - a woman in the way of his providential plan.