Trump extends immigration restrictions, bans J1 and other visas until end of year 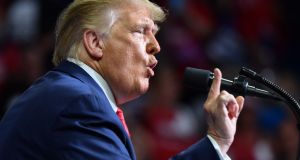 The announcement of the new visa suspensions was made ahead of a visit by US President Donald Trump to the US-Mexico border in Arizona on Tuesday during which he is expected to highlight the latest phase in the construction of a two-hundred mile wall. Photograph: Nicholas Kamm/AFP via Getty Images

US president Donald Trump has extended immigration restrictions, banning the J1, H1B and other visa programmes until the end of the year.

Mr Trump was due to sign an executive order on Monday, with officials stating the move will protect American jobs at a time when the coronavirus pandemic has severely impacted the US economy.

Officials said an estimated 520,000 immigrants will be prevented from working in the US from now until year-end due to the action.

Though US embassies across the world had effectively stopped issuing most categories of visas – impacting upon thousands of Irish students who had expected to travel to the US on the J1 programme – Monday’s order formalises the ban until the end of the year.

In addition to the popular J1 summer working visa for students, there are several other categories of J1 visas, including a programme allowing graduates to work in America for a year and separate programmes for interns and medics.

The suspension of H1B visas, which are widely used by tech companies, will also be a blow for US multinationals who had lobbied hard for an exemption. Approximately, 85,000 H1B visas are issued annually.

The Trump administration also hinted that it wants a reform of the H1B visa system more generally, arguing that recipients displace American jobs.

Also included in the announcement are L visas, which allow inter-company transfers for non US nationals who want to work in the US.

There were some exemptions in the executive order – some H2B visas will continue to be issued for those working in the food production and agriculture industry.

In the presidential proclamation, the President notes that, between February and April, more than 17 million US jobs were lost in industries that are typically used by H2B visas.

He also noted that the unemployment rate for young Americans is particularly high – the age group that typically compete for work with J-visa recipients.

“The present admission of workers within several non-immigrant visa categories…poses a risk of displacing and disadvantaging United States workers during the current recovery,” the proclamation states.

The US Chamber of Commerce denounced Mr Trump’s latest immigration order. “Putting up a ‘not welcome’ sign for engineers, executives, IT experts, doctors, nurses and other workers won’t help our country, it will hold us back,” said the group’s chief executive Thomas Donohoe in Washington. “Restrictive changes to our nation’s immigration system will push investment and economic activity abroad, slow growth, and reduce job creation.”

The outbreak of the coronavirus pandemic has severely curtailed travel into and outside the United States.

While some categories of non US citizens, such as green card holders and diplomats and their families, can move between the US and other countries, other categories of visa-holders currently living in the US legally are banned from re-entering the country if they have spent time in Europe, China or Iran. Similarly, US embassies have stopped issuing ESTA visas, which allow visitors to stay in the US for 90 days under the visa waiver programme.

The announcement of the new visa suspensions was made ahead of a visit by Mr Trump to the US-Mexico border in Arizona on Tuesday during which he is expected to highlight the latest phase in the construction of a 200-mile wall.

Immigration was one of Mr Trump’s key election themes during the 2016 presidential campaign, and is likely to resurface again as election day nears.

Mr Trump’s trip to Arizona is one of several campaign events this week, as he aims to kick-start his presidential campaign amid poor poll numbers.

Mr Trump will arrive in Arizona three days after his first campaign rally of the season in Tulsa was marred by a much smaller crowd attendance than had been expected. Amid estimates that fewer than 7,000 supporters showed up to the 19,000-capacity arena, Trump adviser Mercedes Schlapp said more than 5 million people had watched it online. White House press secretary Kayleigh McEnany insisted Mr Trump was “very pleased with how the rally went”.

Mr Trump’s visit to Arizona on Tuesday will be his latest trip to a battleground state. Arizona is being eyed by Democrats as a possible swing state, while Mr Trump will visit the electorally important state of Wisconsin on Thursday. Though the president won both states in the 2016 election, recent polls show his likely Democratic rival, Joe Biden, ahead.

On Monday, Mr Trump renewed his claim that mail-in voting would lead to election fraud, as several states prepare to expand mail-in voting in November’s presidential election due to the coronavirus.

“Because of MAIL-IN BALLOTS, 2020 will be the most RIGGED Election in our nations [sic] history – unless this stupidity is ended,” he tweeted on Monday. “We voted during World War One & World War Two with no problem, but now they are using Covid in order to cheat by using Mail-Ins!”