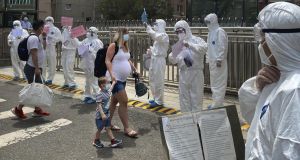 Chinese epidemic control workers hold up signs as a non-national woman and her child arrive to a residential compound as part of quarantine measures, in Beijing. Photograph: Kevin Frayer/Getty Images

More than 7.96 million people have now been reported to have been infected by the new coronavirus globally, and 433,292 have died, according to the latest Reuters tally.

In the UK, the death toll from confirmed cases of Covid-19 has risen by 38 to 41,736, according to government data released on Monday. The latest UK figures came as Scotland recorded no new deaths from the disease in the previous 24 hours, the third time the total death toll there has remained the same from one day to the next since its lockdown began, Scottish first minister Nicola Sturgeon announced.

Meanwhile, a US study has found that a specific mutation in the new coronavirus can significantly increase its ability to infect cells. The research may explain why early outbreaks in some parts of the world did not end up overwhelming health systems as much as other outbreaks in New York and Italy, according to the experts at Scripps Research behind the study.

The mutation, named D614G, increased the number of “spikes” on the coronavirus – which is the part that gives it its distinctive shape. Those spikes are what allow the virus to bind to and infect cells.

Many borders across continental Europe reopened on Monday. Germany reopened its doors and lifted its non-essential travel warning for 27 European countries, including Italy, Austria, Greece, France and Croatia. The country’s travel restrictions for visitors from outside the EU remain in place until at least July 1st.

German tourists flocking to neighbouring Denmark on Monday caused an 8km queue, while Italians popped into France to buy lottery scratch cards amid the easing of border restrictions between their two nations.

Spain on Monday allowed about 10,000 Germans to fly to Mallorca and the other Balearic Islands for a trial run for the reopening of its borders – waiving its 14-day quarantine for new arrivals for the groups.

In Italy, deaths from Covid-19 climbed by 26 on Monday, against an increase of 44 the day before, Italy’s Civil Protection Agency said, posting the lowest such daily tally since March 2nd. The daily tally of new cases also declined slightly to 303 from 338 on Sunday. The total death toll since the outbreak came to light in Italy on February 21st now stands at 34,371, the agency said, the fourth-highest death toll in the world after those of the US, UK and Brazil. The number of confirmed cases of the virus in Italy amounts to 237,290.

Austria has loosened its rules on masks, with face coverings no longer obligatory in shops and other public places, although they remain a requirement on public transport and in health settings.

Norway is to halt its coronavirus track and trace app and delete all data collected so far after criticism over the app from its data protection watchdog, which said it was unjustified.

Three Russian cities joined a growing list of places cancelling June 24th Victory Day military parades due to the Covid-19 pandemic, despite president Vladimir Putin’s decision to press ahead with the main event in Moscow.

Denmark will hand out cash to Danes to stimulate the economy, the Danish finance ministry said, while announcing plans to phase out generous aid packages introduced at the beginning of the coronavirus crisis.

Denmark is set to accept tourists from Iceland, Germany and Norway, but not Sweden, if they book at least six nights’ accommodation.

New coronavirus cases and hospitalisations have hit record numbers in several US states, including Florida and Texas, as most push ahead with reopening after lockdown measures and president Donald Trump plans an indoor rally in Tulsa, Oklahoma.

The Tulsa World newspaper has backed the city’s top public health official in asking Mr Trump not to stage the controversial campaign rally at the city’s Bok centre on Saturday.

The paper expressed concern both in terms of public health because of the ongoing coronavirus pandemic and race relations in light of national protests against police brutality.

On Saturday, the Tulsa public health director, Bruce Dart, told the Tulsa World he was “concerned about our ability to protect anyone who attends a large, indoor event, and I’m also concerned about our ability to ensure the president stays safe as well. I wish we could postpone this to a time when the virus isn’t as large a concern as it is today.”

The news comes as a poll by the Copenhagen-based Alliance of Democracies Foundation found that far more people around the world think China has responded well to the Covid-19 pandemic than think the US has done a good job.

Meanwhile, the US Food and Drug Administration (FDA) on Monday issued a warning to healthcare providers against administering malaria drug hydroxychloroquine or chloroquine in combination with Gilead Sciences’ experimental Covid-19 drug remdesivir. The agency, based on data from a recent non-clinical study, said the co-administration may result in reduced antiviral activity of remdesivir

The warning comes hours after the agency revoked the emergency use authorisation of hydroxychloroquine to treat Covid-19, which has been touted by Mr Trump. The FDA said it was no longer reasonable to believe that oral formulations of hydroxychloroquine and chloroquine may be effective in treating the illness caused by the novel coronavirus.

Several Chinese provinces are stepping up inspections of fresh and frozen meat and seafood, including imported products, after a new Covid-19 outbreak linked to a Beijing food market. More than 100 cases have been confirmed in the new outbreak but no reported deaths, World Health Organisation (WHO) officials said. The origins of the cluster are uncertain, WHO officials said on Monday, but the claim that it might have been caused by imports or packaging of salmon was not the “primary hypothesis”.

India’s capital is fast running out of hospital beds amid a surge in new cases, after critics said it did too little to prepare and reopened shopping malls and temples too soon.

South Korea will face another wave of coronavirus infections, with as many as 800 new cases a day by July, unless the government tightens social distancing rules, a prominent infectious disease specialist there has warned.

Kazakhstan has ordered some entertainment venues in its biggest city Almaty to close and shopping malls, restaurants and government offices to work shorter hours, following a spike in cases.

Singapore will allow small gatherings and the reopening of restaurants and shops from June 19th, its health ministry has said.

The number of daily deaths from the coronavirus pandemic has topped 100 in Iran for the first time in two months, Iranian health ministry data showed on Sunday.

Meanwhile, resident doctors in Nigerian public hospitals have reportedly gone on strike to demand better benefits as they battle the pandemic in Africa’s most populous country. – Reuters