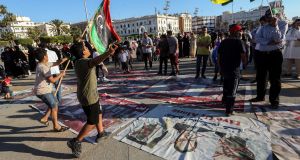 A demonstration in the centre of Tripoli on Sunday. Photograph: Mahmud Turkia/AFP via Getty Images

The United Nations-backed government in Tripoli is refusing to attend talks on the future of Libya in Cairo on Tuesday after Egypt threatened military intervention in its war-torn neighbour.

Ahead of a planned emergency session of the Arab League, the administration in Tripoli condemned comments of Egyptian president Abdel Fattah al-Sisi as a “declaration of war”.

Mr Sisi said if pro-Tripoli forces advanced on the rebel-held city of Sirte it could provoke a “direct” intervention by Cairo.

Egypt, Russia, the United Arab Emirates and France regard the Libyan parliament based in Tobruk in the east as legitimate, rather than the UN-recognised, Turkish-supported government in Tripoli in the west.

Mr Sisi described Sirte, the coastal hub of the country’s oil industry, and the al-Jufra region 300km to the south, as a “red line” for Cairo. If this line was crossed, Egyptian forces would directly intervene in Libya, he said.

Al-Jufra was captured by rebel General Khalifa Haftar in 2017 and Sirte in 2019 as his forces advanced along the coast to the suburbs of Tripoli, where the offensive stalled for nine months. Turkey broke the stalemate by providing arms, armour and several thousand surrogate jihadi militiamen to bolster Tripoli’s defenders and enable them to drive Gen Haftar’s forces eastwards 450 km to Sirte, where they halted.

Egypt has called for a ceasefire, peace talks in Geneva, withdrawal of foreign fighters from Libya and elections, but Turkey has rejected this proposal and made a truce conditional on Gen Haftar’s surrender of Sirte and al-Jufra.

Neither side has shown willingness to budge. Turkey’s president Recep Tayyip Erdogan and his fundamentalist Justice and Development Party seek to install a Muslim Brotherhood-type regime in Tripoli and exploit the country’s geographic position and oil resources.

Egypt and its allies reject the government in Tripoli, citing its dependence on local fundamentalist militias and the influence of Brotherhood politicians.

The UN has reported that Russia has sent to Libya up to 1,000 militiamen from private contractors as well as warplanes to join the battle against Tripoli and Ankara, positioning Russia and Turkey on opposite sides in Libya as well as Syria.

Most Arab governments regard the Muslim Brotherhood as their chief enemy and do their utmost to suppress it. Arabs feel empowerment of the Brotherhood in Tripoli could destabilise neighbouring Tunisia’s fragile political balance between the movement and secular forces.

Arabs also consider non-Arab Turkey as a foreign interloper in their affairs. Egyptian military intervention in Libya could effect a dramatic change in the balance of power and make it difficult for Erdogan to stick to his hard line.