The Celtic leader who subjugated the warring tribes of Spain

Irish Connections: King Breogan is one of Galicia’s most revered medieval heroes 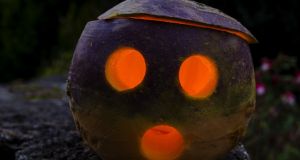 Both the Irish and the Galicians marked the Celtic feast of Samhain by hollowing out turnips, carving faces into them, hiding down country lanes and waving them over the ditch, scaring the bejeepers out of passers-by. Photograph: iStock/Getty Images

Check out the music of the piper Carlos Nunez, or the band Luar na Lubre, and you won’t have to be persuaded that there are very real links between Ireland and Galicia. Opinions differ as to the direction in which these links have travelled - but everyone can agree that there has been a good deal of cultural to-ing and fro-ing, across the centuries, between here and there.

It’s also pretty certain that if you spend some time in the modern Galician city of A Coruna, as reader Andrew Cullen did last year, you’ll find yourself walking westwards out of town towards one of its main tourist attractions, the Tower of Hercules.  Perched on a promontory overlooking the Atlantic it’s the oldest working lighthouse in the world, and a UNESCO world heritage site.

With its elegant square form and a pedigree which dates back to Roman times, the tower is an unmissable landmark.  On the landward side of it, however, is an equally unmissable monument: a statue of one of Galicia’s most revered medieval heroes, the Celtic king Breogan.

Andrew tell us that he hadn’t heard about Breogan before he visited A Coruna, and a quick check around confirms that Irish people aren’t overly familiar with the name.

So, by way of celebrating the Celtic feast of Samhain - which the Galicians liked to mark, as did the Irish, by hollowing out turnips, carving faces into them, hiding down country lanes and waving them over the ditch, scaring the bejeepers out of passers-by - let’s travel back into the mists of medieval Europe and have a look at Breogan’s story.

It comes from the Lebor Gabála or Book of Invasions, a compilation of Irish legends put together in the 12th century.  Breogan was a Celtic leader who, having subjugated the warring tribes of Spain, fetched up at A Coruna, where he built a tower.

When Breogan died he was succeeded by his son Íth.  One day Íth climbed to the top of the tower, saw a mysterious island floating on the horizon, and set off to conquer it.

Íth clearly had pretty good eyesight; most people nowadays agree you’d need to a) have been to Specsavers, or b) arm yourself with a satellite-guided telescope, in order to catch a glimpse of the Irish coast from Galicia.

The author of the Lebor Gabála was obviously aware of this problem with his plotline, since he added the beguiling detail that Íth’s vision took place on a winter evening; “for a man’s eyesight is best on a clear winter evening”.

Anyhow, Íth set off for Ireland, where the country’s three kings, men of the Tuatha De Danann, promptly had him killed.  His followers brought his body back to Spain and in due course his avenging kinsmen, the sons of Mil, returned with a large army, defeated the Tuatha de Dannan and established themselves as the rulers of Ireland.

Like Íth’s mysterious island, the legend which insists that the Milesians stayed, and evolved into the Celtic ancestors of the Irish people, floats in and out of popular cultural vision. For a rational and scholarly view, read John Carey’s essay “Did the Irish Come From Spain?”  on  historyireland.com. To hear the story retold with all sorts of proto-Celtic flourishes and the help of the Symphony Orchestra of Galicia, go to Luar na Lubre’s 2014 album Torre de Breoghán, or Breogan’s Tower.

Whether the Tower of Hercules has any connection to Breogan’s tower, and what that connection might be, is still a matter for debate. It’s not A Coruna’s only Irish connection.  The University of A Coruna has the Amergin University Institute of Research in Irish Studies.  There’s also a GAA club by the name of Fillos de Breogan (Breogan’s Sons).  Meanwhile, Andrew has a Breogan-related question of his own. “I wonder did Breogan become Brogan and do his successors now play for the Dubs,” he asks.  Now we’re definitely not getting into that discussion.