As a Mayo girl in Nashville, I’m asked daily where I’m from and how I ended up here 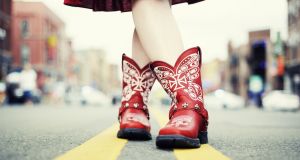 ‘Here in Nashville, we have gathered a misfit family.’ Photograph: Getty Images/iStock

In recent months, something has started to upset me. I hear phrases like “I’m gonna take out the trash” or “check the mail” or “fill up on gas” coming out of my own mouth.

I remind myself they are just words; when you hear certain phrases repeated over and over in daily life, you inevitably end up adopting them yourself. Yet, it feels like a loss that will one day result in me sitting on an outdoor rocking chair wearing a wife-beater, toting a gun and spitting tobacco in an old bucket. The relative unlikelihood of me encountering such a fate doesn’t ease the fear of it happening.

As a Mayo girl living in Nashville, Tennessee, I’m asked daily where I’m from and how I ended up here. The first question is easy to answer, but the second takes a little thought.

What am I doing here?

I ended up in America because I wanted to live in a Scorsese movie. I felt like Robert De Niro in Taxi Driver, walking the streets of New York when I first moved to America in 2011. I thought I was Charles Bukowski when I visited the Frolic Room in Los Angeles. I was Hunter S Thompson when I bought my first car, an old Cadillac Coupe De Ville.

But I was Fiona from Mayo when it broke down on the side of the road, with smoke bellowing from the engine; I had to call my mechanic with frozen fingers on that cold winter night, watching the smoke rise in the yellow glow of the headlights.

Frank I called him; the Cadillac I mean. I’ve had him more than a year now, and he has come to represent a physical version of my decaying American Dream.

Frank has many oil leaks, but he is trying desperately to keep himself running despite his rough idle and coughing engine. He still looks good, he still feels good, but his essence is fading. He was made for beauty, not practicality.

Frank is my America. I thought the US was a 1970s Cadillac. I thought I’d live in an old drive-thru. I thought I’d be David Lynch from Twin Peaks, driving by palm trees in the back of a Lincoln Town Car, sipping Chateauneuf Du Pape.

In reality, the fabric of my idealism was chewed up by rats, infested by roaches, smothered by the lack of an air conditioning unit in 100-degree heat, incinerated by an overheating engine.

I ended up in Nashville because of a man from Ohio. Well, that’s the short version of the story. My visa was coming to an end in New York, so we went to City Hall in Lower Manhattan to get married. I didn’t know it at the time, but it allowed me an acceptable, clinical reason to let love in. I let the excuse of obtaining a Green Card disguise my own need to love and be loved.

After another year of living as broke and berated waiters in New York, we moved to Georgia in an effort to stabilise our bleeding finances, sanity and humanity. A year later we moved to Tennessee, so my husband could follow his love of music.

Here in Nashville, we have gathered a misfit family including Frank the Cadillac, Houdini the hamster, who was found in a car park, and a one-eyed dog named Dexter, who we took in to save him being euthanised. It’s pretty homey, but it’s not home.

Last summer we went back to Ireland for my sister’s wedding in Connemara. My dad brought us to see the house my granny grew up in. He told me the old cottage was being demolished so someone could build a new home.

When we got to the site we were all surprised to see a substantial section of the old stone wall of my great-grandmother’s home had been restored, and incorporated into the new house.

Whoever those people are, I am so grateful. In those bricks are remnants of the lives of my granny and her mother, and my father’s childhood, and my own. As someone living so far from home, desperate not to lose my foundation, I am so happy those crumbling bricks meant enough to someone to keep.

Ireland will always be my home. Even if the odd Americanism slips into my vocabulary, I will happily still have an old brick wall in Connemara to lay some claim to.

‘I felt something furry move under my hand. Man alive, I am terrified of rats’
2