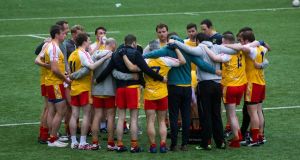 Max Thiemann - or “the Kerry German” as he’s sometimes referred to in Barcelona - hadn’t much experience living among the underdogs before he moved to Catalonia two years ago.

The former Kerry footballer, born in Bavaria to German parents but living in Ireland since the age of three, had represented the Kingdom in Croke Park as well as winning school and university All-Ireland titles, with Coláiste Na Sceilge and DCU.

Now he lives in Barcelona, where he has quickly become ingrained in Catalan life, running a small school with his Catalan girlfriend in a rural area, talking the language, he even represents the Catalan national team in pool. Thiemann has also come to understand their campaign for self-determination and independence.

“I’m in the fist of it as they say,” explains the 26-year-old teacher. A powerhouse midfielder, with a delicate touch that also allowed him to play in the forward line, he left a promising GAA career behind him in south Kerry.

“English is kind of trendy over here, everyone wants to do it. So luckily enough I got a job because of it. I’m happy out here,” he says.

Thiemann never thought he would have the chance to continue playing Gaelic football after moving to Barcelona, but a former DCU team mate set him up with Barcelona Gaels, which has “turned out to be something brilliant”.

“It gives you a sense of being home away from home. You go on the Saturday - it’s played on an astro turf rugby pitch and you play 11 aside - and there’s kind of a comradery. It’s great craic but it’s still competitive. Madrid have been better than us the last few years - and it’s sickening really but what can you do!”

Along with the GAA, Thiemann’s other passion is pool, at which he has also excelled since arriving in Barcelona.

“I heard there was a pool table in the local, and that they have a pub team. Catalonia is mad into pool, it’s been going to world and European championships for a long, long time. I just brought over my cue, thinking I’d have a few games in the local, and I ended up playing for the Catalan national team.”

As well as mixing with other Irish expats, he has a dressing room bond with the natives too. With the region currently embroiled in a divisive campaign for independence, where does he stand on it all?

“You can say ‘oh you’re a foreigner what have you to do with it’, but it’s the country that we live in. We have every right to be involved,” he says.

Thiemann was at his local polling station on October 1st, the day the Catalan independence referendum - deemed illegal and banned by the Spanish government - was violently disrupted by Spanish Civil Guard officers.

“I couldn’t vote myself. But I was there to get a feel for what the whole situation was about. People went in the early hours and stayed the whole day. They offered up so much of their own time for what they believe in, and there was a great sense of togetherness.

“We got news that the Spanish police were coming around and you could grasp the fear in peoples’ eyes. After seeing what had happened elsewhere it went from elderly people sitting playing cards peacefully one second, to shivers going down peoples’ spines the next. Would they come and try to forcefully take away peoples’ rights? Luckily they didn’t make it to our polling station.”

The Catalan government has since made a suspended declaration of independence - suspended in the hope of dialogue with Spain - off the back of over 90 per cent voting in favour of independence. They say 43 per cent of the 5.3 million eligible electorate turned out, while another 13 per cent had their votes taken away during the police operation.

In recent weeks there have been solidarity protests in Dublin and Belfast and Galway, but Thiemann believes the issue is not being given the attention it deserves internationally, after the violence abated.

“There are a lot of people in Europe who might be afraid it will spark a revolution in their own country, maybe governments are afraid that if there's a split there might be a problem recovering Spain's debt,” he says.

“People get very upset when their views are not reflected in the media, and there seems to be a lot of bias.”

Spain has given Catalonia until Thursday to confirm if they have declared independence. Failing to deny, or rectify, such would trigger article 155 in the Spanish constitution, which allows for the removal of Catalonia’s self-governance.

“How can this be resolved? There is a problem there. I can only comment from my experiences, but unfair distribution of money. Funding and resources in education, in infrastructure. How do you solve a problem, you sit down and talk about it and try to find a solution. But denying it and trying to brush it under the carpet is not the solution.

"I have to take my hat off to Catalans. Since I’ve moved here I’ve seen that they are as friendly a people as you could meet, really hard working and they really want to improve this situation. There is a sense here that something will be achieved, and a sense of excitement that something finally is happening.”