The hipster church enticing millennials to Mass in Brooklyn

Have I stumbled upon a cult I wonder, or just a church successfully attracting the young? 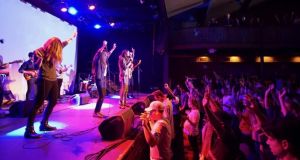 ‘Can’t wait to worship with you tomorrow!’ @C3Brooklyn on Twitter

I’m outside the Music Hall of Williamsburg on a Sunday morning. As one of the many venues owned by Bowery Presents, this is a place mainly known for hosting concerts. Among a crowd of hip, well-to-do Brooklyn millennials, you could reasonably assume we are waiting in line for a concert.

In fact, we are all here for church.

Every Sunday morning, this hall is transformed into C3 Brooklyn - the C3 standing for Christian City Church - a non-denominational church founded by Australian pastors Josh and Georgie Kelsey, who came to New York in 2013. C3 Brooklyn has since expanded to four locations, and a membership of over 1,000 people.

As part of a network of 400 churches in 64 countries that make up C3 Global (founded in Australia in 1980), the culture is defined as “Christ-centered, spirit-powered and connect-driven”.

As someone from a traditional Roman Catholic background in Ireland, that consisted of mass most Sundays and going to a school founded by French nuns, I’m intrigued to find somewhere that seems so different to my previous experience with religion.

Brought along by a mutual friend who recently “found” God, I’m lost for words as I take in the fresh-faced, enthusiastic Brooklynites. This crowd differs entirely to the mass goers who attend church back home.

This Sunday we are 1 church 4 locations—our heart is to see Downtown Brooklyn filled with the light & love of Jesus! https://t.co/VZOjUWhGa0 pic.twitter.com/nFhFxnczVE

Zoe, one of C3’s volunteers, explains how the first half-hour is for “meet and greet”. Like anywhere with good customer service, her job is to greet both regulars and newcomers so everyone feels welcomed and included.

Learning of my C3 virgin status, she connects me with four other newcomers. One works in advertising, two are actors and another is a stylist; all “colourful” and “creative” types that C3 aims to entice.

When asked what brought them here, the two actors mention they had been part of a Presbyterian church in their hometowns of Dallas and Virginia, and are looking for a church in New York. The stylist, Claire, has been brought by her flatmate. Speaking with more seasoned congregants, it seems they too started out with a similar search for a spiritual home in the city.

Some sort of cult?

By the end I can see why, even if it isn’t necessarily for me. The crowd is youthful and creative; the energy electric. As a church that banks on satisfied and repeat customers, it is important they deliver a fun experience. After the meet and greet we take a seat inside. The vibe is more show than church as a band plays Christian rock and people stand by the stage with their hands in the air. The only giveaway that this an event with some kind of religious purpose is the projection on the wall displaying an image of a man and the words “Jesus Saves” emblazoned across. This will later give way to a well-edited video of Isabelle, an attendant who tells us how C3 changed her life.

Pastor Josh is brimming with youthful excitement. He clearly takes such joy in delivering the word of God, something I found sorely lacking in the majority of church services I attended in Ireland. Wearing a black t-shirt, jeans and Chelsea boots, Pastor Josh is dressed like many in the crowd. As he delivers his sermon, people intermittently throw their hands in the air and shout “Praise Jesus!” At this I inwardly cringe: it’s too much for this jaded Catholic.

The thought does cross my mind that I have stumbled into some sort of cult. My mother worries when I tell her about the experience afterwards.

With locations in New York’s hippest neighborhoods - Williamsburg, Bushwick and the Lower East Side - everything about this organisation is made to attract the modern-day millennial. Their website proves the talent of their marketing team. Emphasis is on the social aspect, with imagery centering around food, music, friends and gatherings. It is entirely unchurch-like, without a cross or religious iconography of any sort. This church isn’t dry and stuffy; it’s fun and alive, the website implies.

The church collection has also crossed over into the digital age, by use of an app called Pushpay. Created specifically for church donations, giving has never been easier and sure enough, during the service I glance over and see the woman beside me contribute in a few simple taps.

Another component to C3 Brooklyn is its weekly Wednesday dinner parties. With 30 taking place around Brooklyn and Manhattan, the purpose is to connect C3 followers in a more informal setting while going over the message of the pastor’s sermon. Attending a dinner party with 30 other guests the following Wednesday - a barbecue on a congregant’s Brooklyn rooftop no less - I was pleasantly surprised by how normal the situation seemed. Not knowing where the church stood on alcohol, I brought some snacks, but there was boxed rosé awaiting those inclined to a tipple. After 45 minutes spent getting to know one another, C3 volunteers called everyone over to discuss Pastor Josh’s message. It was like the Christian equivalent of group therapy, with people taking turns to talk about how it could be practiced in our daily life.

Coming from Ireland where only 13 per cent of church goers are aged between 12 to 30, it is bizarre to go to a church where the entire demographic is early 20s to late 30s. Add to that the fact that these people unselfconsciously take rapturous delight in the word of God. As someone who is more spiritual than religious, I take my dose of religion lightly. These people believe they have found Jesus, whereas I grew up always having him somewhere in the vicinity.

But this doesn’t stop them from repeatedly trying to lure me in. Every Saturday I still get a text reminding me about the service the next morning. Sorry C3, my Sundays here in New York are now for lie-ins.