Irish Connections: The novelist used it as the setting for a story of feuding mining families 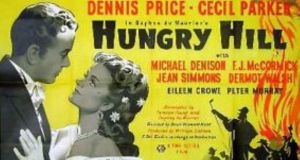 Hungry Hill: the film tanked despite the presence of a young and luminous Jean Simmons as Jane Brodrick

“Last night I dreamt I went to Manderley again . . .” The opening sentence of Daphne Du Maurier’s Gothic chiller Rebecca is one of the most famous in 20th-century literature. Her short stories The Birds and Don’t Look Now are equally memorable, and have been made into iconic films by Alfred Hitchcock and Nicolas Roeg.

Du Maurier is celebrated for her depictions of seafaring Cornwall. What’s less well known is that she also wrote a novel set among the rugged Caha Mountains of west Cork. Hungry Hill, from 1943, begins: “It was typical south-westerly weather, the clouds travelling low, and the soft, blustering wind bringing scattered showers that fell heavy for five minutes and then passed, leaving a space of blue no larger than a man’s fist in the sky, with a glimpse of a sun that promised nothing.”

Anyone who has spent any time on the Beara Peninsula will recognise those showers, that fist of blue. It’s more of a challenge to recognise the mountain that gives the book its title. In real life Hungry Hill is a spectacular but baleful presence on the coast between Adrigole and Castletown Bere. Its squat solidity and mysterious hollows make it one of the most distinctive mountains you’ll ever see, yet the hill that features in Du Maurier’s novel is generic to the point of anonymity.

So why did she choose this part of the world for the setting of Hungry Hill? The usual answer is that it’s down to a shared heritage between Cornwall and Beara, in the shape of copper mining. The novel tells the story of two feuding families, the Brodricks and the Donovans. Plot in a nutshell: the Brodricks set up a copper mine on the eponymous hill; the Donovans set out to undermine them.

Du Maurier may never have laid eyes on the real Hungry Hill, but she certainly knew the real “gentleman farmer” Christopher Puxley, whose ancestor John Puxley started the Allihies copper mine, in 1812.

In fact, according to a new biography of Du Maurier by the French writer Tatiana de Rosnay, the writer had an intense wartime flirtation, if not a fling, with Puxley, who told her tales of his Irish ancestors and showed her a collection of family letters.

In Manderley Forever de Rosnay uses a novelistic present-tense style to re-create the relationships that inspired Du Maurier’s best-known fictional characters, some with men, some with women and one, strangest of all, with a Cornish country house called Menabilly, which she never owned but rented for 20 years, and eventually had to leave.

Du Maurier had other Irish connections. Her sister Angela, known as Piffy, wrote a novel set in Connemara. Called The Road to Leenane, it’s about a painter and the three women who compete for his attention. And her son Christian Browing, known as Kits, married the former Miss Ireland Olive White in Dublin in 1964, causing a ruckus outside the church as the model’s Irish fans scrabbled to catch a glimpse of her. One woman was taken to hospital with a suspected broken leg.

Like The Birds, Don’t Look Now and, most famously, Rebecca, Hungry Hill was eventually adapted for the big screen. But despite the input of Du Maurier, who worked on the screenplay, and the presence of a young and luminous Jean Simmons as Jane Brodrick, the film tanked.

A critic from the New York Times praised a sequence in which a stuffy Anglo-Irish ball is transformed into “a lively jig session” by the presence of a local fiddler. Despairingly, however, he concluded that “the film’s running time is about average, ninety minutes, but the narrative, for all its ample conflict, progresses so ponderously that it seems interminable”.

Oddly, that’s the word that has often come to mind for hikers attempting to reach the summit of Hungry Hill on a grand, soft west Cork day, across its apparently endless reaches of bog and bare rock. So Du Maurier and the west Cork mountain are united, in an odd way, in the end.

If you know of an Irish connection that would interest readers of this column, please email awallace@irishtimes.com with details of the story, as well as your contact address