‘The air quality here in Berkeley is really bad. I can feel it in my chest and throat’ 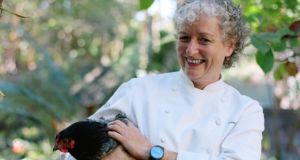 Irish chef and teacher Frances Wilson, living in Berkeley, California: “It is so awful to think of what the beautiful Napa and Sonoma Valleys will look like for years to come”.

Northern California’s wine country, home to some of the US’s most celebrated wineries, has been devastated by this week’s wildfire outbreaks. At least 21 people have been killed and 3,500 homes and businesses destroyed in what has been described by fire officials as the deadliest wildfire in California history.

The Wine Institute of California issued a statement saying it was too early to assess the damage, as the fires continue to rage. Napa Valley Vintners, a trade group with 550 members, said four wineries had suffered “total or very significant losses”, and at least nine others have reported significant damage to vineyards and buildings.

Frances Wilson, sister of Irish Times wine writer John Wilson, has lived in Berkeley, California, since 1990. “We woke up at 3am on Monday morning with a wind blowing and a strong smell of smoke. Our first thought was that it was our neighbour’s chiminée, that she sometimes lights in her back yard. But it was really hot, so it didn’t seem likely. I checked online and saw it was up in Napa.

“The air quality here in Berkeley is really bad, a weird red light with the sun coming through the smoke. I have a headache and can feel it in my chest and throat. I can only imagine what it must be like up in Napa and Sonoma."

Wilson is a chef and teacher who regularly works in Napa. “Malcolm, the owner of Silverado Cooking School, had to evacuate Sunday night with his family. Their house and farm was close to the Stag’s Leap fire. The school and downtown Napa are not affected, although many have lost power.

“The fires are not yet contained, so much of this could change. I had two classes this weekend that have been cancelled. One was a private event – the spouses from a conference in town. They cancelled the conference. We get a lot of business from the Silverado Resort, which was evacuated.

“A number of wineries have been damaged or completely ruined, and many will worry about smoke taint that may affect their grapes or wine. Some wineries have already harvested and should be okay, as long as the winery itself hasn’t burnt down, but one of my winemaking friends was due to get his grapes from Atlas Peak, and they are not yet picked.

“Another friend has a property up in Potter Vally east of Ukiah. His caretakers and animals have been evacuated. We were supposed to be sending his pigs to be slaughtered in Santa Rosa next week. Not sure if that will happen now. Many of the dairy farms in Sonoma had to be evacuated too. It is so awful to think of what the beautiful Napa and Sonoma Valleys will look like for years to come.”

John Wilson writes: Earlier this year, I stayed a few days in Napa, a very attractive historic town that was finally recovering from a devastating earthquake in 2014. I then spent several days travelling around the Sonoma Valley and Pacific Coast. It was a beautiful verdant countryside, with mature trees, dairy farms, old wooden houses and small boutique wineries, with the pretty town of Sonoma at its centre.

All of this has now changed utterly. It has not rained and the dry forests and scrubland are ablaze. By some estimates, 23 people have died and 285 are missing. More than 150,000 acres of land has been scorched and 3,500 structures destroyed.

Some of the wineries are no more, others have lost their cellar, packed with several vintages of maturing wine. Grapes that have not been picked may be tainted by smoke and unusable. Wines in the cellar may also be damaged.

Tourism, the region’s other major business, will certainly be badly affected. It is not yet clear how badly the towns, buildings and mature forests (Sonoma has some ancient Redwood forests) have been damaged. It is certain that it will take years for the region to recover.

First Look: Dig In, the Maser-curated ‘art diner’ that’s about to open in Dublin
3