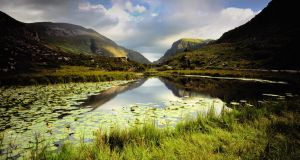 The gap of Dunloe in Killarney, Co Kerry.

This week debate between Irish people abroad has temporarily moved from the emigrant vote referendum to another topic - hurling. To be precise, it has centred around the divisive question as to what is the correct name for the ash stick used to play the game: is it hurl or hurley? Ned Monaghan, originally from north Cork and living in the United States, sparked the debate in The Irish Times’ Letters page this week, and has written a new piece for us today explaining his position.

Our most read story in Abroad this week is from Barry Dunning, originally from Co Kildare and now living in Jakarta, on how he explains Ireland to people who’ve never heard of it. Dunning says he has stumbled upon an (almost) foolproof answer when Guinness, St Patrick, shamrocks, leprechauns or Roy Keane don’t work to describe Ireland. Another most read article in Irish Abroad this week was about when an Irish emigrant, who had travelled home from Australia to scatter the ashes of his father and mother, was left in limbo after Aer Lingus lost his bags and – with them – the remains of his parents. The airline apologised, the missing ashes were found and the ceremony went ahead on Co Antrim.

Also popular this week was an article from journalist Una Mullally, who searched through the archives to find out what returning emigrants made of Ireland in 1989: “For a time I felt Ireland was a narrow, Catholic, little dump. I feel less angry now.” Over in the US, film producer Sarah-Kate Fenelon, from Co Wicklow, writes about her life working in Hollywood for author Neil Gaiman. “The Irish have qualities that make us easy to get along with abroad,” she says.